Migrating from chaos to London 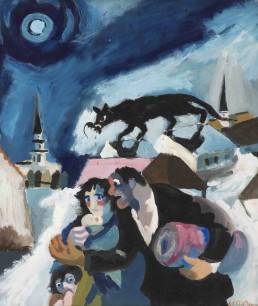 Darrelyn Gunzburg reviews a celebration at Somerset House of 100 years of London’s Ben Uri gallery: ‘Out of Chaos: Ben Uri 100 Years in London’

Collections are conversations. When curators bring together paintings never meant to be placed alongside each other, the juxtaposition of their cultural backgrounds creates ‘multilogues’ that allow new patterns to form. The voices in the Ben Uri collection come from different times and different countries but they all have one thing in common: they tell the story of migration, moving from chaos to a place where, with the blessing of good fortune, they were able to find safety in a new land, the UK. This new pattern of migratory journeys, visually manifested over the last 100 years by émigré artists, and aptly named ‘Out of Chaos’, is currently being celebrated in the east wing of Somerset House, King’s College, London.

The exhibition, on view until 13 December 2015 in the Inigo Rooms, is displayed over four rooms, each given to specialist themes: Integration and Identity (Room 1), Conflict and Modernism (Room 2), Forced Journeys (Room 3) and Postwar (Room 4). In the corridor running parallel to the rooms, curators Rachel Dickson and Sarah MacDougall have created a History Timeline of the last 100 years. Here, the exhibitions of the north London gallery, Ben Uri, are listed alongside major artistic events involving immigrants.

This exhibition displays 70 master-works from the Ben Uri’s world-class collection. If you have followed the Ben Uri long enough, some of pieces in this exhibition step forward as old friends: Mark Gertler’s Merry Go Round (1916) with its carousel of uniformed soldiers, sailors and their sweethearts whose open mouths form a frozen choir of one long elongated scream; Emanuel Levy’s Crucifixion (1942) with Christ, dressed as an orthodox Jew wearing a tallit (prayer shawl) and tefillin (prayer phylacteries), nailed to a cross amidst a field of white crosses on unmarked graves, as a symbol for the suffering of the Jews; an early painting of Josef Herman entitled Refugees (c.1941), with its strong and bold colours encapsulating a man, his wife and two children, awash in a blaze of blue moonlight, a black wolf-like creature on the roof tops behind them clamping a mouse dripping blood firmly in its jaws; and Pre-Raphaelite Simeon Solomon’s soft-edged depiction of the two heads in Night Looking upon Sleep her Beloved Child (II) (1895), evoking the somnambulant liminal space where Night wraps her cloak around Sleep.

Others works in the exhibition are new acquaintances: Shmuel Dresner’s memento mori, a collaged landscape entitled The Ghost Town (1982), created from burned and ripped pages of English and Yiddish texts; Jacob Kramer’s Day of Atonement (1919), a pencil, brush and ink study for a larger painting, of a procession of men covered with taleisim (prayer shawls) with one Jew, centrally placed, looking backwards like Lot’s wife; Moshe Ovid’s bronze Chanukiah with Doves (c.1949), commemorating victims of the Holocaust through a bird with outstretched wings hovering over her brood of eight chicks, each a candle bearer; Vitaly Komer and Alexander Melamid’s watercolour and pastel work entitled The Big Bang (2004), formed of geometrical shapes covered with Hebrew letters, reminiscent of the Sefer Yetzirah, the written version of the oral code describing the creation of the world through the potency of the alphabet and the recognition that handwriting was magical and divine.

‘Out of Chaos’is also Ben Uri’s story, celebrating the hundredth year since Ben Uri was founded by Russian-Jewish emigré Lazar (Eliezer) Berson in July 1915. For Berson, having recently arrived in London from Paris, creating a society for Jewish art was a long-held ambition. His belief in the possibility of a Jewish art society that could one day become a National Museum was so intense that he succeeded in creating it in the midst of the First World War, thus offering another meaning to the title of this current celebratory exhibition. Originally known as ‘The Jewish-National Decorative Art Association (London) “Ben Ouri”’, and based at Gradel’s Restaurant in Whitechapel, today Ben Uri describes itself as ‘The Art Museum for Everyone’; It focuses specifically on art, identity and migration across all émigré communities in London since the turn of the 20th century.

This metamorphosis of Ben Uri’s place in the London art world through the reshaping of its identification, reflective of what each of the Ben Uri collection of artists has had to do, is based on its belief that where cultures meet, understanding can grow. Yet this transformation has also catalysed a dilemma. Ben Uri describes itself as the only specialist art museum in Europe that addresses issues of identity and stories of migration. Yetdespite its outstanding collection and the infrastructure of curators, scholarly publications, digital engagement and outreach community programmes, it has not as yet been able to find permanent exhibition space in central London.  This is its mission. Meanwhile the story that this current exhibition tells is both sobering and exhilarating. Above all, this is a beautiful exhibition, lovingly articulated, carefully crafted, and worth every moment you spend with it.

Out of Chaos catalogue