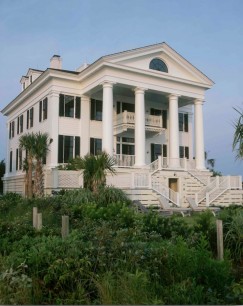 ‘Palladian Design: The Good, the Bad and the Unexpected’is a gem of an exhibition focusing on the revolutionary design principles of 16th-century architect Andrea Palladio (1508–80), of Padua, taken up and copied globally by architects and builders throughout the next four centuries, to the present day. The exhibition, co-curated by Charles Hind and Vicky Wilson of the RIBA, and designed by Caruso St John architects, includes some rarely seen treasures –books, drawings, plans, models – from the RIBA’s priceless collection – and 21st century design projects from Britain’s foremost architects. Together they shed new light on Palladio’s legacy, revealing why his design aesthetic remains relevant today.

The exhibition layout, overseen by Adam Caruso of Caruso St John makes light of a compact space, displaying drawings, models and plans as tools of the architectural trade, to emphasize the working aspect of the  objects, laid out on plain wooden workshop-style tables, not as works of art. Chairs are provided so that one can sit at the tables, to take time to study them in more detail.

The exhibition has three themes, revolution, evolution and contemporary,  divided chronologically into ten groups. It opens with ‘Andrea Palladio: Reinventing Antiquity’, and a portrait bust of Palladio, c.1740, possibly cast by John Cheere (1709-87). Placed above head-height, it makes one feel Palladio is overseeing the show too. No portraits of Palladio are extant, thus this sculpture, derived from a bust of the architect commissioned in the 1720s by the amateur architect Richard Boyle, 3rd Earl Burlington (1694–1753), remains the image often reproduced.

The most highly finished of Palladio’s presentation drawings is in the first section of the displays including ‘Elevation of a palace façade’, early 1540s, which may have been a project for Palazzo Poiane, in Vicenza.  Palladio’s architectural treatise I Quattro libri dell ’architettura (The Four Books of Architecture), published in 1570 is a highlight, alongside an adaptation by Giacomo Leone (1686-1746), and Vitruvius Britannicus (or The British Architect), 1717, by Colen Campbell (1676–1729). It introduces ‘Anglo-Palladianism’, defined in the architecture of Inigo Jones and Colen Campbell. Displays of original plans and drawings, include Jones’ design for the Queen’s House, Greenwich (1616). Lord Burlington’s contribution to Palladian architecture in Britain is acknowledged. Chiswick House, London is a fine example.  One of his 12 copies of I Quattro libri dell ‘architettura, is exhibited.

The second section focuses on Palladian design worldwide, showing adaptations in Western, colonial and post-colonial contexts. A superb 1721 wooden model of St Martin-in-the-Fields church, by Scottish architect James Gibbs (1682–1754), is at centre. Look out for a perspective of Catherine the Great’s Pella Palace, c.1786 by architect Ivan Starov, (1745–1808) from St Petersburg. Palladianism in America has never fallen out of fashion but has recently surfaced in celebrity designer homes cruelly dubbed McMansions.

The third part includes paragons of late 20th-century and 21st-century design. Not to be missed is Theo Simpson’s film, commissioned by the RIBA, relating Caruso St John’s ‘Brick House’, London, 2005 with Palladio’s Villa Caldogno, Italy, 1542. And, ‘Glashütte’, Eifel, France, 1985, by German architect Oswald Mathias Ungers (1926–2007), is a superb example of Abstract Palladianism. So too ‘Cowshed’, Shatwell Farm, near Castle Cary, Somerset, England, completed in 2012. Built on Palladian principles, evident in its proportion, space and light, the cowshed is one of several agricultural buildings designed by architect Stephen Taylor (b.1963). One can relate it to Palladio’s own agricultural complex, the barchessa or barn, at Villa Angarano, Bassano dell’ Grappa, Italy, 1554–56, shown in the first section of this exhibition. It highlights the curators’ underlying theme carried through the displays that Andrea Palladio is still relevant today.

The exhibition, in The Architecture Gallery at the RIBA, London is on until 9 January 2016. The exhibition programme includes a series of lectures and workshops. The catalogue (at a reasonable price), contains three essays by notable Palladio scholars: Guido Beltramini, discussing ’Palladio, Palladianism, Palladians’; Pier Vittorio Aureli writing on ‘Palladianism: A Project of Radical Discontinuity; and Daniel Maudlin’s ‘Cyma Recta: Palladianism and the Everyday’.

Palladian Design: The Good, the Bad and the Unexpected