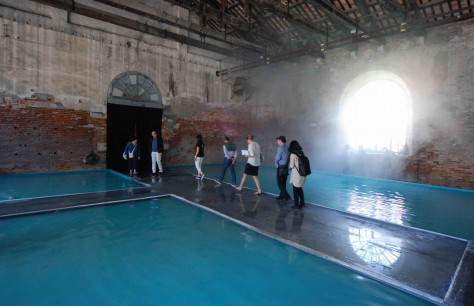 Basia Sliwinska and Michal Fornalczyk report on this year’s Venice Biennale. The future here looks pretty bleak but ‘All the World’s Futures’ has a few touches of both hope and déja vu

2015 marks the 56th International Art Exhibition, La Biennale di Venezia, one of the most significant European art shows, featuring the latest trends and research (or market direction) in contemporary art. When the first exhibition opened 120 years ago, there were no national pavilions. Now, there are 88 national presentations of artistic work and initiatives to the public across the Giardini and the Arsenale, and in Venice itself.

Initially, 90 countries were supposed to participate in the 2015 Biennale. Costa Rica cancelled its pavilion after the curator, Gregorio Rossi, proposed charging participating artists over $5000; and Kenya pulled out after it emerged that only one Kenyan artist would represent the country in an exhibition co-organized with China and Italy, which would feature 16 artists in total, including 14 Chinese). There are 44 collateral events spread through various locations within the city accompanying the main exhibition. The Biennale is still built on paradox and contradiction. It follows a model of presenting art by nation-states at a time when divisions between nations are blurring. It is good that this year more artists from outside Western Europe and North America are presenting their work. Nonetheless, it is a market-driven and nation-driven exercise.

The title of the 2015 Biennale, curated by Okwui Enwezor, ‘All the World’s Futures’, promises a lot. There is a strong sense of political disquiet and agitation underpinned by a livereading of all three volumes of Karl Marx’s Das Kapital. In the most ostentatious pavilion in the centre of the Giardini, in the 160-seat theatre called the Arena, a team of performers read the work daily for 10 hours. This began in the opening days of the exhibition and will continue until it closes on 22 November 2015.

Enwezor’s curatorial statement explains that the organization of the Biennale was guided by three intersecting filters: ‘Liveliness: On Epic Duration’, ‘Garden of Disorder’and ‘Reading Capital’. He writes that ‘Biennale di Venezia will delve into the contemporary global reality as one of constant realignment, adjustment, recalibration, motility, shape-shifting’. Consequently, a‘Parliament of Forms’ orchestrates the exhibition, testifying to the tension between histories and counter-histories signalling resistance, negation or dissent.

Enwezor has orchestrated a Biennale that is theory- and history-ridden. Some might find it hard to digest (the exhibition has been described as, for example,  ‘didactic’, ‘daunting’ or ‘unpleasant’). It is certainly overwhelming but at the same time it is the most inclusive and diverse Biennale to date (although still only 33% of artists on show are women). An undercurrent of Marxist theory runs through the main exhibition, national pavilions and collateral events. At a time of global transformation, Enwezor forcefully encourages a reflection on contemporary art through the lens of 19th-century labour and subsequent market conditions. He suggests that the capitalist system is an overarching framework within which art is embedded and which can be explored to demonstrate perverse social disparities and exploitation of labour. Capitalism and commodity culture form the lens through which artists question the world’s futures, and the current state and appearance of things.

This future is dark and bleak. Pavilions are filled with skulls, skeletons, representations of endangered species, dying or decomposed trees, raddled objects, decaying buildings, trashed flags and overall decay. There are also different versions of shop installations and other microcosms of capitalism and commodity-driven spaces critiqued by means of subverted Louis Vuitton logos. This edition of the Biennale presents a multitude of projects and works reflecting different theoretical positions, some of which are indeed politically driven and provide an alternative visionary potential and a counter narrative to concerns with issues of identity (national, religious, gender and so on). Others are nostalgic or naive, obvious and repetitive.

The overarching theme of the exhibition is broad and so a plenitude of versatile ways of thinking are on show. Enwezor’s vision was to confront issues of the world in the midst of violent turmoil, in economic crisis and facing a humanitarian catastrophe. This is a world on the verge of environmental and climatic collapse characterized by borderlands and divisions, uncertainty and insecurity, in which individuals seek refuge in places that seem more prosperous.

This vision is perhaps present in some of the works but these issues should be addressed more explicitly. What doesn't help is that some of the artists on show were included in previous exhibitions curated by Enwezor, which perhaps suggests a too-predictable line of thinking. This is not to say that the exhibition is not complex and at times thought provoking. Many works are juxtaposed in surprising ways and the overall design is impeccable and richly textured. Nonetheless, the title of the Biennale seems inappropriate. Rather than looking towards the futures, there are too many moments of déjà vu.

Rather than exploring artistic possibilities of the present as suggested by Enwezor’s statement, there are too many iterations of the status of the art object. He writes, ‘How can the current disquiet of our time be properly grasped, made comprehensible, examined, and articulated? […]. It is with this recognition that in 2015, the 56th International Exhibition of la Biennale di Venezia proposes All the World’s Futures a project devoted to a fresh appraisal of the relationship of art and artists to the current state of things’. This is a laudable aim but one not fully achieved. The overabundance of answers doesn't address what this state of things really is.

One of the artists who does offer an opening towards the future is Chiharu Shiota, representing Japan. Her installation The Key in the Hand (2015) is an irresistibly beautiful, poetic and hypnotizing entanglement of red yarn and more than 50,000 keys collected from people all over the world. They are attached to strings and hover over two ancient-looking boats, and they fill the pavilion. Shiota’s installation composed from keys holding memories of individuals to whom they belonged represents hope.

Usually a key is associated with protection of personal safety, valuables or spaces. But keys also open doors towards the unknown. They offer an opportunity to explore. In Shiota’s work they hang above two boats, which, as the artists explains, symbolize hands catching individual memories locked in the keys. In the current context of refugees leaving their homeland often by boat, the boats become a vessel of hope holding a key to opportunities in the future. The keys are joined by red strings (red symbolizing blood and human relationships), which are knotted, tied, tangled or stretched, and they become a medium illustrating complex connections within society. Shiota’s installation inspires one not to hold a key to lock oneself in, or protect and create a border, but to open the doors towards the future and a new beginning, and to be hopeful.

Both the Costa Rican and Kenyan exhibitions are being held as planned but without official national affiliation.
The Venice Biennale continues until 22 November 2015.