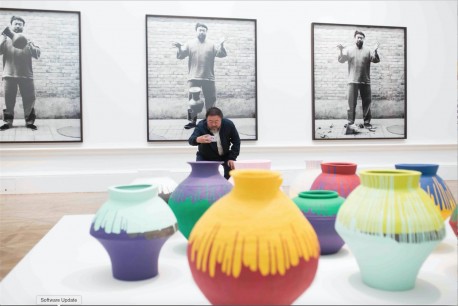 Ai Weiwei is a nuisance! Following the 2008 Sichuan earthquake in which many thousands died, he brought to the world’s attention the deaths of some 5385 students who perished owing to the shoddy construction of their schools and colleges. Then, in 2010, having ironically been accused of failing to comply with local building regulations, his own studio was unceremoniously pulled down and he was arrested for organizing a party to mark the occasion. Finally, in 2011, he was arrested and detained in solitary confinement for 81 days on a charge of ‘economic crimes’. Clearly a thorn in the side of Chinese officialdom, Ai carries on regardless and uses these events as triggers for his art. All three of the above events are marked at this awe-inspiring survey of his work at the Royal Academy in London.

Ai is, of course, most remembered for his involvement in the design of that widely circulated image of the 2008 Beijing Olympics: the Bird’s Nest stadium. Nevertheless, he was highly critical of the Olympic movement and has now distanced himself from the project, rather disingenuously as it remains his signature work and he was under no compulsion to be involved in it. Still, this landmark exhibition, a true blockbuster judging by the press scrummage, presents the full gamut of Ai’s art. Not one for getting his hands dirty, he provides the concept and not the labour but that does not detract from the beauty, power and ingenuity in his work.

Furthermore, the venue is ideal, offering wide and well-lit spaces for works that require no little effort to look at and some imagination when marvelling at their making. The Royal Academy has opened up 10 of its main galleries for this exhibition and almost every centimetre is used up, whether it be with Ai’s expansive sculptures and installations, which fill the floors, or his energetic wallpaper designs, not to mention the names of the dead Sichuan students in memoriam covering the walls. Even the ceilings are used, with a kitschy chandelier fashioned from that most ubiquitous of Chinese objects, bicycle wheels.

Yet despite Ai’s self imposed exile from his native land – he lived and worked in the US from 1981 to 1993 – what we see is essentially Chinese. Many critics look for Western influences such as Michel Duchamp, the European master of the readymade, and stamp Ai with the brand of ‘hybridity’. But every work in this show reeks of China:  its ancient history seen in Neolithic pots dipped in bright garish industrial paints; Ming and Qing dynasty antiques fashioned into sculpture that you can almost smell and certainly want to touch; and modern industrial materials salvaged from natural and unnatural acts, reformed to make artistic and political statements.

For Ai loves his country, as is clear from his love of maps. The floor of the first room is covered with metal bars seeming to form a three-dimensional rectangular ocean but Bed is a relief of the Chinese coastline and borders, only to be seen by lying, or crouching, on the floor beside it. The map motif is seen later (or rather not for a mirror above might have actually caught the image) where a skeletal sculpture Fragments made from pillars and beams from dismantled temples form a indoor forest that from above forms the map of the People’s Republic.

And it is Ai’s criticism of that homeland that will live in the visitor’s memory, especially as the final room, which is given over to S.A.C.R.E.D: six dioramas each acronymically devoted to Supper, Accusers, Cleansing, Ritual, Entropy and Doubt and each, when viewed through its tiny peephole, giving a sense of the immensely grim and claustrophobic experience Ai went through during his 81 days of imprisonment for tax evasion. This is bound to be one of the key exhibits and I couldn’t help feeling uncomfortable waiting for my turn to be voyeur to Ai’s misery and that of countless yet nameless others who fall foul of the Chinese leadership. But my favourite piece, and one at which you cannot but smile, is the encased Art Book 2014. In fact two copies: the English version with a page devoted to Ai Weiwei and the Chinese version with Ai airbrushed out and replaced by Agostino di Duccio.

Unlike those for recent exhibitions here in London highlighting the art and history of China, the audience here seemed to be free from Chinese press or cultural representatives. This is a shame but not unexpected as official comment on this exhibition would indeed be interesting if not rather difficult. Let’s hope that Ai Weiwei remains a nuisance to Chinese authorities for it is that conflict that produces the best of his work. Yet I was somewhat disappointed to find some of this dissident comment has been converted into canvas bags and costume jewellery on sale in the shop, which surely misses the whole point.  There is, however, a fully illustrated catalogue with contributions by RA staff Tim Marlowe and Adrian Locke, which cannot but fail to capture the experience of being among Ai’s monumental works.  Despite the price and the crowds, this is a show not to miss.