Rubens: The private life of a great artist 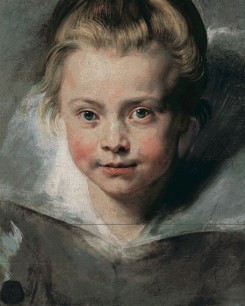 Rubens left us a moving record of his family life. Rosalind Ormiston reviews a fascinating book

Rubens in Private: The Master Portrays His Family edited by Ben van Beneden with Foreword by Philip Heylen

Flemish artist Peter Paul Rubens (1577–1640) is said not to have had much time for portrait painting. He thought it required no inventiveness for an artist to paint what he saw. Fortunately, that did not stop him from painting portraits of his patrons, himself, his family and his friends. In the Foreword, Philip Heylen, Antwerp’s Vice-Mayor for Culture, writes a succinct summing up of the artist:

Peter Paul Rubens could do anything. He was a brilliant and versatile artist, ran a large studio, spoke several languages, knew all there was to know about art, collected antiquities, and Italian masters, designed his own house, criss-crossed a warring Europe as a diplomat, and was interested in science.

In 1609, at the age of 32, Rubens married 18-year-old Isabella Brant (1591–1626), Flemish daughter of Jan Brant and Clara de Moy. To celebrate his marriage, he painted an informal betrothal-marriage portrait, known as The Honeysuckle Bower, c.1609–10 (Alte Pinakothek, Munich), possibly as a gift to Isabella’s parents. In near life-size portrayals, Rubens presented himself and Isabella seated – he raised slightly higher than she – both lavishly dressed within an outdoor setting, holding hands, leaning in toward each other. Many symbols within the work underlie their unity and social status.

And this is key to his family portraits as status symbols. In the book an excellent essay by Cordula van Wyhe ‘The sartorial ambitions of the artist and his wives’, reveals the meaning of identity and attire in Rubens family portrayals; and an essay by Nils Büttner ‘Se ipsum expressit: Rubens’s self-portraits as public statements’, illuminates why Rubens never depicted himself as a painter but kept the focus ‘on his intellectual accomplishments and horizons’.

But Rubens depicts much more than her clear skin tones, ruddy pink cheeks and golden hair, or the impish determined gaze aimed directly at him. He captures a private conversation between them, so much so that one feels present at the sitting. Clara died at an early age, c.1623, before her 13th birthday.  A later portrait of Clara’s mother, painted c.1620–25, captures the same look, the same steadfast, questioning gaze. In the book an essay by Johan Verberckmoes ‘Families and emotion in the Spanish Netherlands’, looks at family life, the extended family and life expectancy; just 36 years for men; 39 years for women.

The book’s essays unfold Rubens’ life through personal episodes that affected him and each member of his family. During his time abroad, often for many months on diplomatic missions for The Infanta Isabella, letters to his close friend Jan Gaspar Gevartius – reproduced here in Rubens’ handwriting (with translation) – reveal his concern for his sons. At the age of 34 Isabella had died of the plague. Gevartius oversaw Rubens’ sons’ education. One letter (London, 15 September 1629) revealed the emotional separation, ‘Best of all, I should like to go home and remain there all my life’.

The following year Rubens married Helena Fourment (1614–1673), the youngest of 11 children of silk merchant Daniël Fourment and Clara Stappaerts. Helena gave birth to five children by Rubens: Clara Johanna (1632–89), Frans (1633–78), Isabella Helena (1635–52), Peter-Paul (1637–84), and Constantia Albertina (1641–c.1709–12). Rubens captured their individuality in portrait studies, conversation pieces, drawings and paintings. Reading Rubens in Private: The Master Portrays His Family, reveals their history. From it one learns much about life in the Rubens household, the family’s position in society, and Rubens’ social relationships, which harnessed his position as a great artist.