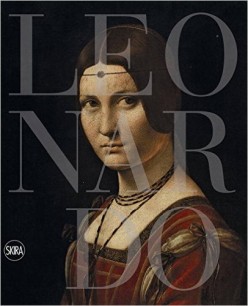 How did Leonardo’s numerous scientific investigations contribute to his art? Alexander Adams reviews a massive new book for Leonardo fans

In April 2015 an extensive exhibition opened in Milan. It featured drawings, paintings and other works by (or relating to) Leonardo da Vinci (1452–1519). It marked something of a homecoming for the artist, who lived in Milan serving the Sforza ruling family from 1482 until its deposition by French invaders in 1499. Despite Leonardo’s being resident there for nearly two decades, there are a grand total of two paintings by him in the city: the iconic mural The Last Supper and the unfinished Portrait of a Musician. The ruined mural is only still in Milan because the Francis I of France was dissuaded from detaching it from the wall as he wished to. It is a meagre legacy and attests to Leonardo’s chronic failures as a painter – both in terms of deficient technique and lack of commitment to the medium of painting. Briefly, this year Milan once again became a properly Leonardine city.

The catalogue for that exhibition is a considerable work of scholarship. At 614 large-format pages, the catalogue covers all of the material exhibited in the Milan exhibition, comparative illustrations and much art associated with Leonardo and the Leonardeschi (followers of Leonardo). Some of the discussion delves into obscure Italian drawings and paintings that are rarely published.

It is a peculiarity that among Leonardo’s followers only Boltraffio is better than competent. Most of the major painters of the Italian Renaissance had many talented or even brilliant pupils. Why not Leonardo? Perhaps Leonardo’s art was too idiosyncratic. Leonardo was also far from a model painter – leaving works unfinished, using experimental techniques, often disregarding standard practice and spending prolonged periods on projects unrelated to painting. The exact functions and personnel of Leonardo’s studio are not well understood despite considerable scholarly research.

Part of the purpose of this exhibition is to show that things we consider Leonardo’s ‘side projects’ – which actually consumed most of his time – did feed into his art. Leonardo scholar Martin Kemp persuasively argues that the Mona Lisa is a summation of Leonardo’s comprehension of natural forces in the world. The atmospheric, hydrological and geological phenomena depicted in what is ostensibly a modest portrait of a bourgeois lady are certainly quite beyond what the commissioning patron would have expected or requested. Leonardo’s intellectual attachment to the portrait perhaps explains why it was in his possession at the time of his death and not delivered to the patron.

Elsewhere evidence is provided to support the thesis that Leonardo’s studies in anatomy, hydrodynamics, machinery, architecture, botany and biology supported his work as a visual artist and that they can be detected in his other paintings. One writer points out the proximity in Leonardo’s notebooks of the famous cross-section of a skull and the drawing of a dome, making an obvious parallel between anatomy and architecture – in the field of rendering, if no other.

The catalogue includes many examples of drawings of machinery from the 12-volume set of Leonardo’s drawings and writings known as the Codex Atlanticus. Some of the drawings were refinements of existing devices and not outright inventions. It is suggested that Leonardo’s research into manned flight was more of an intellectual exercise rather than a pursuit intended to translate directly into practical experiments. On the other hand, the designs for elaborate casting devices for the monumental Sforza bronze horse were absolutely practical and were almost completely in effect when the French invasion of Milan ended that project.

Even for those who think they know Leonardo inside out, there are surprises. Lesser-known drawings are reproduced. The essays provide the latest research and insights into Leonardo’s ideas and working methods. Many works are introduced as partly or wholly attributed to Leonardo. Some of the attributions are rather hopeful but many a persuasively argued. Intriguing suggestions include a single fish in Verrochio’s Tobias and the Angel, painted by Leonardo while he was a pupil. It seems that detail was added after the painting was complete and it is certainly apparent that the technique is much more sophisticated and naturalistic than the rest of the painting. The painting belongs to the National Gallery, London.

Research suggests Leonardo was the first artist in Florence to have practised the making of rapid sketches. A good selection of comparative illustrations shows how Leonardo’s innovations came to be widely imitated later. In an essay by the ever-lucid Kemp, we discover the artist using his studies in hydrodynamics to inform the design of an elaborate coiffure of a representation of Leda and to explain the distortion of arteries in the autopsy of an old man. An essay examines the notoriously tricky subject of Leonardo’s sculptures. Though Leonardo is known to have made a number of sculptures, there are no extant sculptures universally accepted by Leonardo experts. A selection of possible examples is illustrated in this catalogues, inviting the reader to pass judgement.

There is one editorial decision that seems mistaken. Although most of the essays provide translations of Leonardo’s writing in quotes, not all do. This means that sometimes to completely decipher an essay one has to resort to the particular English edition of Leonardo’s treatise to which the author refers. Why not supply a translation in footnotes? Happily, the majority of the essays are fully translated. Readers conversant with Italian history and art historical terminology will not find anything obscure here.

This giant book will be a vital reference text for dedicated Leonardo fans.