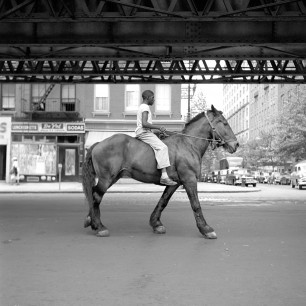 Don’t miss this month-long festival of photography. Among the highlights are ‘Vivian Maier: A Life Uncovered’, 48 prints by this exciting photographer are on show at the German Gymnasium, Pancras Road, London, NW1 2TB. Sadly, Vivian Maier (1926–2009) did not live to see her own success. She worked as a nanny in Chicago and New York and her images, over 100,000 of them, were not discovered until after her death, by John Maloof. Many had never even been developed, as she could not always afford to do this. Maloof is now cataloguing them and putting them on public display, hence this show of, mostly, pictures of 1950s New York people and scenes.

Nearby, at the Minnie Weisz Studio, ‘Adventures in the Valley ‘is the work of Polly Braden and David Campany, the valley in question being the Lea Valley, named after the river that runs from Hertfordshire into the Thames at east London – much of the 2012 Olympic site falls in the London end of the Lea Valley. Braden and Campany’s work includes landscape images, portraits and staged events that between them capture various aspects of life along the river, which flows through rural and semi-industrial areas.

Polly Braden is a past winner of the Guardian Young Photographer of the Year, the Jerwood Photography and the Magenta Foundation Emerging Photographer's Award. Her work has been published in British national newspapers and has been exhibited in Chicago and the Netherlands, as well as the UK. David Campany is an artist, curator and writer who has written a number of books on photography and co-curated Anonymes: Unnamed America in Photography and Film for Le Bal, Paris, in 2010.

A wide variety of other photographic work is also on show across London this month. A map is available showing all the venues taking part.

If you are interested in photography, check out some of the books we have reviewed in Cassone.