The Golden Nit has landed at Tate Modern 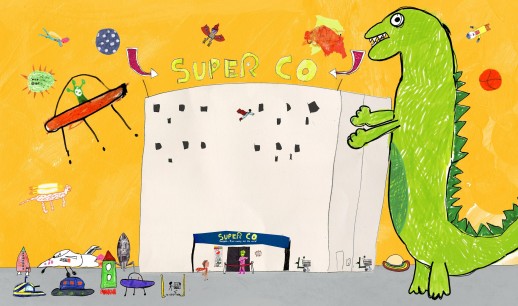 The Tate Movie Project’sThe Itch of the Golden Nit(Tate Modern from 6 July) is the first of its kind – an animation made by and for children. Thousands of drawings, sound effects and story ideas by children from across the UK make up the action-packed, half hour animation as part of the Cultural Olympiad.

David Walliams, Miranda Hart, Catherine Tate and Rik Mayall lead the stellar cast providing the voices for the children’s characters from Evil Stella to Captain Iron Ears. Funded by Legacy Trust UK and BP, with additional support and resources from the BBC, the film has been brought together by Tate and the creative magic of Aardman Animations.

The Itch of the Golden Nitfollows 11-year-old hero Beanie on his mission to save his parents from Evil Stella and to return the Golden Nit to its rightful place at the heart of the sun, thereby saving the universe. It’s a surreal and spectacular adventure that only the wild imaginations of kids could dream up!

The 13 children who drew the lead characters will attend the premiere along with children from London schools who took part in the Tate Movie workshops, actors who voiced the characters and other famous names with their families. The vivid imaginations of the children who drew the lead characters really helped to propel the story to another level. 13-year-old Sarah from Swansea’s inspiration for the Golden Nit was her cat, which has fleas – she drew her cat's tail on the nit. And the two contributors who drew Mum and Dad (Fiona and Emma) come from the same family of six children in Bristol. They are obsessed with the website, having submitted over 200 drawings between them and their brother Tristan, who also has a cameo character in the film.

The film will be broadcast on British television (BBC2) at 09:00 on Saturday 2 July followed immediately at 09:30 by ‘How we Itched the Golden Nit’ a ‘Making of…’ special from Blue Peter. It will also be shown at regional British galleries over the summer and at a special BP-supported London 2012 Open Weekend event on Saturday 23 July in Trafalgar Square. The film will also be screened on London 2012 Live Sites (big screens) in cities across the UK as part of London 2012 Open Weekend. The public will also be able to see the film at Camp Bestival in July and at Vue cinemas nationwide over the August Bank Holiday. An exhibition about the project with free screenings of the film opens at Tate Modern on 6 July and runs until the end of August.

The stellar cast has provided the voices for the lead characters chosen from the many drawings submitted by children aged 5 to 13, the result of over 250 workshops and tens of thousands of individual uploads to the Tate Movie Project’s online movie studio. The online studio has had more than 500,000 hits since it went live last July and a touring Movie Studio spent months on the road visiting galleries, schools and festivals across the country encouraging children to use art as inspiration for their drawings and story ideas. Children did everything from inventing brand new superhero gadgets to spending a whole afternoon drawing planks for the pirate ship.

The project is part of the London 2012 Cultural Olympiad and has been made possible through £3million of funding from Legacy Trust UK, an independent charity set up to create a cultural and sporting legacy from the London 2012 Olympic and Paralympic Games. BP, as one of the Premier Partners of the Cultural Olympiad, is providing further substantial funding and is helping to evaluate the process to further inform Tate’s future youth projects. BP is also making possible the screenings and workshops at Trafalgar Square on 23 July. As well as broadcast support through CBBC and the entire project being recorded by Blue Peter, BBC Learning has produced fun, accessible resources for kids and teachers alike.