Ahmed Alsoudani at Haunch of Venison 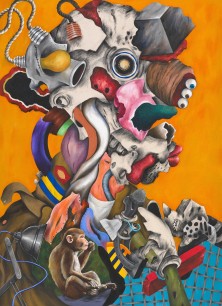 Haunch of Venison is pleased to present the first solo show in Britain by acclaimed Iraqi-born artist Ahmed Alsoudani. In this new series of paintings, Alsoudani continues his complex exploration of war and conflict, its physical atrocities and psychological consequences. Featuring deformed, almost bestial, figures twisting in vivid and surreal landscapes, these tableaux are often laced with a barbed or morbid humour in the manner of artists such as Francisco Goya and Max Beckmann among others. Imagery of devastation and violence abounds, with figures depicted at the moment of a dramatic transition – through fear or agony – from the human to the grotesque.

The departure points for Alsoudani’s elaborate compositions are energetic charcoal drawings through which he entwines and intersperses ribbons of startlingly bright colour, blurring traditional distinctions between painting and drawing. Alsoudani’s palette recalls the vivid colours typical of Renaissance altarpieces with their similarly violent, almost hyperreal depictions of human suffering. While Alsoudani acknowledges the influence of many artists on his work – from Caravaggio to Carroll Dunham – he has at the same time developed his own unique pictorial language, one based on his personal experiences of growing up in Baghdad under Saddam Hussein’s regime during the first Gulf War and of the more recent Iraq conflict.

The paintings in this exhibition resist literal readings of warfare, instead suggesting the inherent chaos of conflict and its dehumanizing effects on humanity. ‘I’m not trying to make ‘war paintings’, Alsoudani says, ‘but paintings about war. I’m more interested in depicting the effects of war of the people who live under these circumstances’. Rather than depicting actual battle scenes, his turbulent compositions seek to communicate greater emotional truths about the horrors of human conflict through abstraction, disfiguration and the repetition of symbolic forms. Despite their joyous colour and effusive activity, the universality of suffering resonates throughout these pictures: fleshy, tubelike objects resemble eviscerated organs, tortured limbs splay in all directions, a single eyeball pops out of a skinless head.

Born in Baghdad in 1975, and  now living and working in New York City, Ahmed has a BFA from Maine College of Art and an MFA from Yale University School of Art. Recently, Alsoudani was one of six artists chosen for the inaugural Iraqi presentation at the 2011 Venice Biennale, and was simultaneously featured in ‘The World Belongs to You’ at the Palazzo Grassi and ‘The Future of a Promise: Contemporary Art from the Arab World’ (curated by Lina Lazaar), also in Venice. Other recent group shows include ‘Unveiled: New Art from the Middle East’ at the Saatchi Gallery (2009), and exhibitions at the Arab Museum of Modern Art, the Minneapolis Institute of Art and Gwangju Musuem of Art. In 2012–13, Alsoudani will mount a solo exhibition as part of the Wadsworth Atheneum’s MATRIX programme, followed by a major exhibition at the Portland Museum of Art, Maine, which will tour to the Phoenix Art Museum, Arizona.