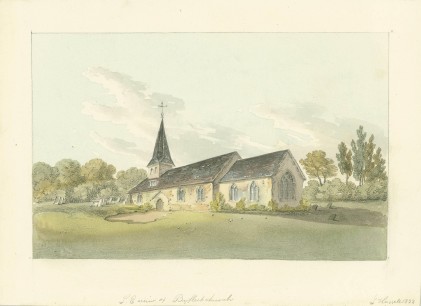 This exhibition, organized in partnership with Surrey County Council’s Surrey History Centre, Lambeth Archives and supported by the Friends of The Lightbox, focuses on the Hassells’ depictions of Woking and its surrounding parishes, revealing a picturesque view of Surrey before the age of the railway.

John Hassell (c. 1767–1825) was a topographical painter in the picturesque tradition. He exhibited his first picture (of Stonehenge) at the Royal Academy at the age of just 22. John’s artistic talents were put to good use with the travel books he produced and illustrated. It was through such works as Picturesque Rides and Walks within Thirty Miles of the British  Metropolis (1817–18) and Excursions of Pleasure (1823), that John’s fascination with Surrey developed. In the last five years of his life John travelled all over Surrey, resulting in his producing at least 750 watercolour drawings of the county.

Edward Hassell (1811–52) followed in his father’s footsteps with his keen interest in art and indeed with Surrey as his subject. Taking over from John, Edward continued to produce watercolours of the county. The style of the watercolours altered with this change of hand. Edward’s preference for church interiors captures the ancient furnishings of box pews and triple-decker pulpits that were so often swept aside by later restorations.

Though the Hassells earned their living as drawing masters, their topographical watercolours were produced in response to an increasing demand from ‘gentlemen collectors’, eager to add colour illustrations to their copies of the three-volume county history of Surrey completed by Owen Manning and William Bray in 1814.

Curator, Julian Pooley comments ‘This exhibition brings together an impressive range of watercolours that excel in both picturesque beauty and architectural interest. The churches, cottages, houses and street scenes recorded by the Hassells provide a fascinating glimpse of our county nearly two centuries ago. Though many buildings can still be identified, others have disappeared or been altered radically over time’.