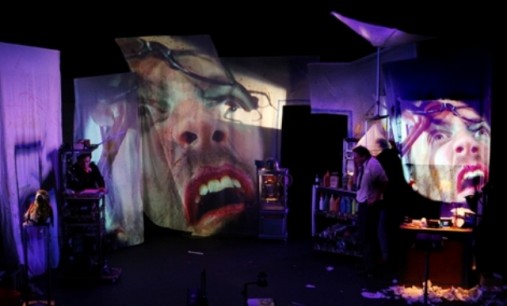 Visiting London for Christmas? Come and enjoy London's  unique and vibrant multiculturalism for the festive period

Yuletide takes an alternative guise: traditional mulled wine and mince pies alongside enchanting and extraordinary spectacles from all over the world

Southbank Centre’s Winter Festival takes place this season 18th November 2011 – 11th January 2012 throughout venues both within the Southbank Centre itself and across the Thames-facing promenades.

From an extravaganza of colour and movement in the dazzling musical The Bollywood Tripto the spellbinding, dreamlike enchantment of Murmurs, here for its London premiere, this year’s Winter Festival offers something forall audiences – from young to old and from the culturally curious to the most sophisticated of culture vultures –

including music, theatre and comedy. There are both ticketed and free events throughout the festival.

As well as all this, the festival will display a special trail of festive lights, leading you to the Southbank Centre’s own roof garden, where for three weeks there will be the beautiful Winter Garden Grotto. Close within, the fantastic Forkbeard Fantasy have created a wild and yet wonderful exhibition in Spirit Level at Royal Festival Hall.

Endless stalls of festive delights at the bustling Christmas markets complete the offerings, making for a festive celebration like no other you’ll find this year.

The Colour of Nonsense
Monday 19 – Friday 30 December
Purcell Room at Queen Elizabeth Hall
With Forkbeard?s famed mix of visual trickery, film and outlandish storylines, The Colour of Nonsense is an exuberant satire on a world always in search of ?the new?. Folkbeard Fanatsy have combined Edward Lear's The Dong with the Luminous Nose with the classical tale, Emporer's new clothes to satirise the contemporary art scene.
At the studios of Splash, Line and Scuro, Cutting Edge Conceptualists, things haven't been looking too hot of late. Splash is paralysed by indecision and all the bright youngsters are queuing up eager to knock him off his perch. Then, out of the blue, comes a mysterious multi-million pound commission but with it confusion and chaos.

An hilarious cartoon journey through the lands of sense and nonsense.
'A glorious dotty comedy thriller inspired by Edward Lear and The Emporere's New Clothes... thoughtful fun; (4 stars)- The Guardian

After the award winning production of Oratorio comesMurmers. Similarly starring in and directing this show it promises to offer wonder and amazement to the seemingly mundane.
A tour of whirlwind romance, city confusion, undersea encounters and dining-room debacles told through a blend of theatre, illusion and dance
2.30pm 24, 28, 31 December & 2 January
7.30 pm 20, 21, 22, 23, 26, 27, 28, 29, 30
December & 2 January
(no performances 25 December & 1 January)
2 January: audio-described performance

In this brand new love story with a twist, Haroon is a young man living in a fantasy world of his own creation, claiming to be India?s greatest Bollywood star. Within this bombastic stage production the protagonist gets both the patients at the hospital, and the audience dancing.

East meets West as an international cast of actors, dancers and musicians present this tragi-comedy by Republique, one of Denmark's most acclaimed theatre companies.