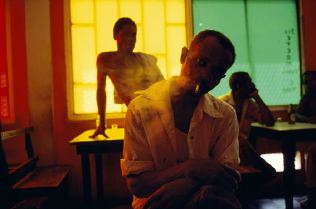 Searing light and intense color seemed somehow embedded in the cultures that I had begun working in, so utterly different than the gray-brown reticence of my New England background. Since then, I have worked predominantly in color.

On Thursday, 26 April 2012 at 6.30 p.m., the Fondazione Forma per la Fotografia, Milan will present the opening of  La sofferenza della luce, The Suffering of Light.  Photographs by Alex Webb.

This exhibit brings together 30 years of photography and journalism by a great artist who uses dense, vivid colours to tell stories about places and situations in some of the most unusual corners of the world.

Early on in his career, in the mid-1970s, Webb (born San Francisco, 1952) worked in black and white, following in the footsteps of his teachers, but he soon discovered another language that was closer to his own sensibilities.  On a trip to Haiti in 1975, something changed in Webb’s way of seeing and taking pictures.  Colour became an essential choice in his storytelling, and since then it has driven him to go to places where light and colour are essential, at times ruthlessly so, to understanding and describing the territory.  Although a member of Magnum Photography since 1976, Webb does not see himself as a photojournalist so much as a street photographer, which describes the empathetic approach he takes on each travel, and each job.

Haiti, the Caribbean, Mexico, Ethiopia, Costa Rica, Brazil, as well as Russia, and his native New England are among the many stops along his photographic adventures. In his pictures, light is strong, violent, and extreme, enhancing both shadow and colour. Alex Webb’s photographs are complex, loaded with different elements, reflective surfaces, and apertures that generate multiple levels of interpretation.

This exhibit brings together a fascinating collection of images in colour, and confirms the stature of one of the most celebrated photographers of our time.

I only know how to approach a place by walking. For what does a street photographer do but walk and watch and wait and talk, and then watch and wait some more, trying to remain confident that the unexpected, the unknown, or the secret heart of the known awaits just around the corner. Alex Webb

Curated by Alessandra Mauro, and accompanied by a catalogue from Contrasto.

In coordination with the exhibit, Alex Webb and Rebecca Norris will offer a workshop, sponsored by Forma on 5 & 6 May, entitled ‘Milan: Find Your Vision’.

For information, please go to www.formafoto.it.

Thursdays and Fridays until 22:00. Closed on Mondays