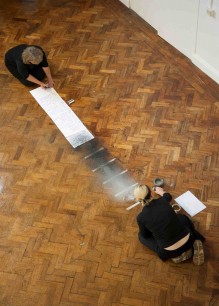 Two University of Lincoln academics have been selected to be resident artists at the Grace Exhibition space in New York to develop their new work Oral/Response which they will perform at this year’s Bristol Live Open Platform (BLOP) festival later this month at Arnolfini. There will be performances at the Grace Exhibition Space from 16 to 20 April, 9 p.m. for 9.30 p.m.

Senior Lecturers at the Lincoln School of Art and Design, Angela Bartram and Mary O’Neill - a collaborative partnership whose work centres on the documentation of performance through situated writing – will head to New York in April to develop their work Oral/Response, which incorporates the simultaneous textual documentation of performed actions Oral/Response is as live as the performance itself, developing in each performance incorporating elements that emerge in response to each site.

The text acts as a mirror that tells the story as it unfold, and the sounds generated during the work’s duration help formulate a memory of its process.
The works reflexivity relies on the observation of each other’s movements and decisions throughout. With no time to reflect, to square up a shot or rephrase a sentence after the event, the integral nature of the work’s document is exposed to complication and chance; it becomes as influential as the action it is intended to record

Visually the work involves Bartram crushing a stick of white chalk with a pestle and mortar, pinching the ground dust into a pile on the floor, inhaling, exhaling and blowing the dust across the floor. The process is then repeated through a grading spectrum of black to white charcoal. O'Neill kneels facing Bartram writes in matching tones on the floor a record of what is taking place before her. They work in synch and in rhythm: one creates a physical action that the other interprets in words scrawled on the floor.

Head of the School of Art and Design at the University of Lincoln, Dr Alec Shepley, said the school was delighted that Dr Angela Bartram and Dr Mary O’Neill have been selected to perform this work at Arnolfini for Bristol Live Open Platform (BLOP).

“The festival presents new work by live and interdisciplinary artists focussing on experiments and unpredictability - it is a great opportunity to share new ideas with an audience, and for audiences to experience something new and clearly demonstrates the quality of contemporary creative practice in the School,” he said.