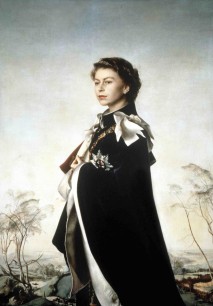 A touring Diamond Jubilee exhibition, ‘The Queen: Art and Image’, which opened last year in Edinburgh – reviewed in August 2011 edition of Cassone –  has since visited Belfast and Cardiff, before completing its circuit at the National Portrait Gallery, London. It is now at the NPG  until 21 October, 2012.

On display, 60 remarkable images of HM The Queen span the 60 years of her reign. Included is one of the most popular royal portraits of the 20th century, Pietro Annigoni’s  painting Queen Elizabeth II, Queen Regnant, (1954–5) on public display for the first time in 26 years.