At Home with the Queen 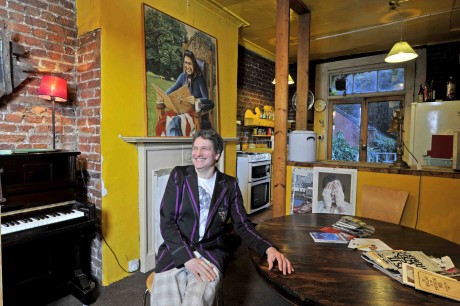 The 12 Londoners professionally photographed include people of all ages and backgrounds, such as Mak Gilchrist, a model from the iconic Robert Palmer video, ‘Addicted to Love’; Miles Landesman, musician, songwriter and playwright; London ‘gal’ Brenda Wilshere who grew up playing in Second World War bombsites in Leyton; faithful Royalist John Loughery and four year old Isabel who likes going to the park and wants to have long hair like Rapunzel!

For centuries Londoners have displayed their affection for their King or Queen through royal memorabilia. The souvenirs in these photographs are as diverse as Londoners themselves, and through them this exhibition explores the bond that many Londoners feel for the Queen today, as well as celebrating her Diamond Jubilee.

I loved the idea of Londoners sending photos of their cherished Queen mementos into the Museum. It seemed like a playful and also celebratory way to be part of the Jubilee celebrations. As someone who remembers the 1977 Jubilee well and having grown up near the King's Road, Chelsea, I associate Jubilees with punk! In my mind being a punk is as thoroughly British as the Queen!