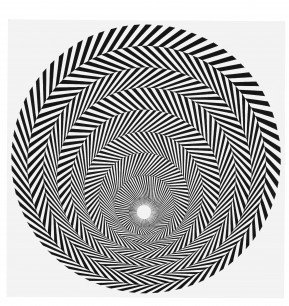 Our free article this month is a review of Bridget Riley's current London show.

If you want to know about the sixties, look at the paintings of Bridget Riley. The 1960s came immediately after the post-war period of ‘high modernism’, when the Abstract Expressionists reigned supreme, and before the postmodernism of Minimalism and Conceptual art. In this decade modern segued into postmodern, movements appeared that were trivialized by some, applauded by others. It was a time to be daring, to strike new ground, and the art of the time expresses this mood as much as the music and the clothes, the architecture and household effects.

In 1964 Harold Wilson led the Labour Party to electoral victory with promises of embracing ‘the white heat of [the scientific] revolution’. Revolution was not limited to science, important at that was for the future. Indeed, for many people at this time, the ‘technocracy’ seemed to be taking over and needed to be resisted. Was art fighting back or succumbing to its power? In the very midst of this controversy we find Riley’s paintings.

To the perplexity of the artist, there were some who saw her work as the expression of mathematical principles or developments of scientific diagrams. For those more in tune with other considerations of the day – the desire to find a unified understanding of mind and body, and to recognize the importance of individual, subjective experience – Riley’s work was a beacon.

The artist’s later work has explored colour in a succession of highly varied abstract paintings but her early monochrome work still fascinates art lovers. There have been various chances to see this work over the past couple of decades and now, as a summer treat, two galleries are collaborating to bring some of it to London.

There are works from both private and public collections, and studies kept by the artist that show something of the process of creation. While it might be thought that, given the limitations of printing processes, reproductions of monochrome works would be more accurate than for colour, this is really not true of Riley’s monochromes. These paintings need their original scale or the effects tend to be lost. Hence while the excellent catalogue is useful, it cannot substitute for seeing the real thing. One needs to see Blaze 4 (1963, at Hazlitt Holland-Hibbert), for instance, to appreciate the white heat at its heart – a blazing sun or a nuclear core, emanating energy.

A study for Tremor (1962) shows the artist experimenting with the triangular units that make up the final painting (also on show) – some of them more concave than anything in the finished work. In the painting itself a number of much larger triangles, created like mosaics from the smaller units, emerge and vie with each other for the eye’s attention, while the constituent units shimmer, creating the visual ‘tremor’ of the title.

Unusually, the catalogue consists only of pieces written contemporaneously with the works. So often, art is interpreted with the benefit of hindsight – necessary but not sufficient. We need to see how work was regarded by its first viewers, and how the artist thought about it then. Here we have a short piece by Riley herself, in 1965, still bewildered by the almost hysterical reaction her work had occasioned in some American viewers. In an interview conducted in 1967, David Sylvester claims her paintings actually hurt his eyes. I have always found such comments somewhat difficult to credit yet looking at a study for Static  (1966) I did find myself feeling distinctly uncomfortable – a first! – though hardly ‘pain’.

In the same interview, the artist herself compared the sensations produced by looking at her work to those of ‘Running…early morning…cold water…fresh things…slightly astringent’.  One contemporary critic noted that looking at her paintings made one more aware of one’s own body.

A study for Hidden Squares (1961), by contrast with Static, seems playful. One sees a rectangle of black circles on a white ground, with four squares among the circles, near the centre. No, sorry, make that 6…8… 12…er… There are squares all over. They lurk and pop out at you. Can you believe your eyes? There is really no pretending that you can coolly assess such works. They take you over; they enact themselves in front of you, often seeming to inhabit the space between you and them, refusing to be pinned down on the canvas.

Guy Burn, an artist and critic, commented in 1964, ‘You move on [from seeing a Riley painting] feeling you have not been a spectator but a participant’. The 1960s may be seen as an age of participation – the CND marches, student protests, ‘Happenings’ – an art that made one feel like a participant had strong appeal. In fact, one can trace a plausible line of descent from Jackson Pollock’s ‘action paintings’, whose creation was filmed so that people were very much aware of the ‘actions’ involved, to the ‘Happenings’ of the 1960s. Here the ‘action’ was taken away from painting and used to make art. Arguably, Riley then pulled this energy and activity back on to the surface of the canvas. She created paintings that were themselves ‘Happenings’.

Above all, these paintings need to be experienced. Go to the Karsten Schubert Gallery and Hazlitt Holland-Hibbert. Look at the paintings and studies – really look, spend some time in front of each one. The sensations you experience will change as you look, generating what Riley tells David Sylvester is ‘a stimulating, an active, a vibrating pleasure’.

Subscribers can see more images from this show - click here.