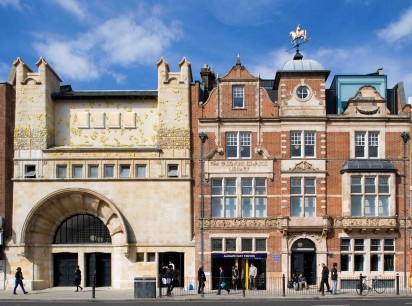 British artist Rachel Whiteread has received a major new commission by for the Whitechapel Gallery’s historic façade.  The work is Whiteread’s first ever permanent public commission in the UK.

The Whitechapel Gallery Rachel Whiteread commission is made possible by the Art Fund and is a key part of the London 2012 Festival, due to be unveiled in June 2012.

Rachel Whiteread is an internationally acclaimed artist who has lived near the Whitechapel Gallery in east London for the past 25 years.  The work is commissioned for the facade of the Gallery, an important Grade II* listed Arts and Crafts building dating from 1901 and designed by Charles Harrison Townsend. The original plans for the Gallery show it was to have a frieze embodying  the Gallery’s public message – to bring great art to the people of London. It was never realized and a large blank rectangle has instead remained above the main entrance.  Now, some 100 years later, the Whitechapel Gallery has commissioned Rachel Whiteread to create a frieze to complete the façade.

For this commission, Whiteread draws inspiration from the decorative Tree of Life motif, which is part of the terracotta building, to create a powerful new
work of art celebrating the qualities of the existing architecture. Typically, Whiteread is making casts from existing features, to then create clusters of gilded leaves and branches which catch and reflect light as a motif that floats above the existing trees on the upper part of the façade. Four negative casts of existing Gallery windows in terracotta will be located centrally within the recessed panel area between the towers, as a formal counterpoint to the leaf elements.

This ambitious and important commission will enable the Whitechapel Gallery to play a central part in the London 2012 Festival by creating a lasting artistic legacy for the enjoyment of all, as well as enhancing one of London’s most important street arteries - Whitechapel High Street or ‘High Street 2012’.
The commission is enabled by the Art Fund.  Famous for its frequent role in ‘saving’ Old Masters for the nation, the commission reflects the fundraising charity’s parallel role in supporting contemporary art.