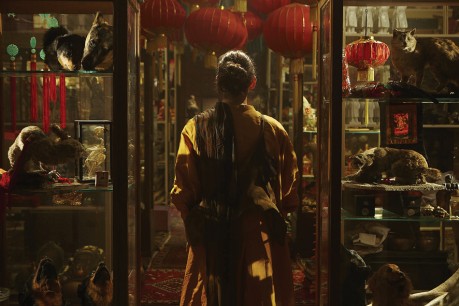 Art Fund International is the £5 million programme launched in 2007 to dramatically transform the collections of international contemporary art in regional museums. The scheme, which saw five successful partnerships between UK museums and contemporary art organisations each allocated up to£1m to invest in acquisitions over a period of five years, draws to a close this year.

The five partnerships are as follows.

Bristol Museums, Galleries and Archives in partnership with Arnolfini has pursued the theme of ‘Glass Walls: Reflections and Interactions’, international works of art that complement existing works in the collection, and that respond to contemporary forces of urbanization, tradition and identity, globalization and migration.

Gallery of Modern Art, Glasgow in partnership with The Common Guild has sought to establish an international context for the Gallery’s recent acquisitions of Scottish art, building a collection of major photography, film, video, audio and text‐based pieces, particularly works which resonate with the artistic, social and environmental context of Glasgow.

Middlesbrough Institute of Modern Art (mima) in partnership with The Drawing Centre, New York, has built an internationally important collection of drawings made by artists living and working in North and South America, from the 1960s to the present day.

Towner Art Gallery, Eastbourne in partnership with Photoworks and Artsway has taken Eastbourne’s physical position, on the edge of the south coast beside Beachy Head, and acquired a series of major international works of art which deal with the image of ‘the edge’ in poetic, metaphorical or political ways.

The West Midlands Partnership: Birmingham Museum and Art Gallery and New Art Gallery Walsall in partnership with Ikon have built a collection exploring ‘The Metropolis – reflections of modern urbanlife’, a series of works by younger artists from across Europe, the Middle East and Asia which examine the diversity, dynamism and growth of the contemporary metropolis, and conceive of city life as a powerful shifting strand of contemporary culture.

Art Fund International has been all about helping UK museums establish or strengthen ties with the widest possible world of contemporary art. For many this has meant collecting beyond the more usual British boundaries for the first time in strength and depth. Through this scheme a range of important and adventurous acquisitions has been made right across the country, and we're thrilled with the results. We think it marks a real turning point.

Art Fund International has marked a step change the international collecting ambitions of UK regional museums and galleries, and transformed British public collections of contemporary art in substantial ways. Peter Hujar, Fred Sandback, Adrian Piper and Emily Jacir are among the major figures in international contemporary art whose work has only now, through Art Fund International, come to be represented in UK public collections. Iconic works by such key artists including Fischli & Weiss, Nancy Spero, Carl Andre, Ellsworth Kelly, Lawrence Weiner and Ai Weiwei have also been bought through the scheme, as well as younger rising stars such as Walid Raad, Barry McGee, Yael Bartana and Cao Fei.

As the scheme enters its final phase, each of the five partnerships are mounting or contributing to major exhibitions over the next year, showcasing these important new acquisitions to mark the successful completion of this important intervention in public contemporary art collections in the UK. Confirmed exhibitions include:

Towner, Eastbourne: ‘The Edge in Landscape’, 13 July – 30 September 2012: Featuring major works by Yael Bartana, Eugenio Dittborn, Mario Garcia Torres and João Penalva, Towner’s summer exhibition of new acquisitions of world‐class contemporary art explores ‘the edge in landscape’ – between different environments, natural or constructed frontiers, or social and political boundaries – and the journeys or endeavours by which such ‘edges’ are transgressed.

The New Art Gallery Walsall: ‘Street’, 20 July – 15 September 2012: The street can be a place to work, to live or to shop. It can be a focus for bustling activity and a celebration of diversity. It can also be a site for conflict, loneliness, alienation and economic gloom. Featuring Art Fund International works by artists such as Barry McGee, Nicholas Provost and Matias Faldbakken, this exhibition brings together artists who explore the darker side of the urban environment as well as those who celebrate its potency as a glimpse of modern life.

Bristol Museums: Global to Local: Autumn 2012/2013/2014: A series of three annual exhibitions beginning this autumn set across both Bristol Museum and Art Gallery and the new M Shed museum, these presentations will explore themes derived from the city’s Art Fund International collection of works by artists who are responding to the contemporary forces of urbanisation, tradition and identity, globalisation and migration.

Birmingham Museum and Art Gallery: The Metropolis, 23 March ‐23 June 2013 A major exploration across 1,000 square foot of exhibition space in the Gas Hall gallery at Birmingham Museum & Art Gallery of themes around urban life, arising from the West Midlands Consortium's collection of Art Fund International works. Including major artists such as China's Cao Fei, India's Jitish Kallat, Russia's Semyon Faibisovich and Germany's Jochem Hendricks, the collection's theme is 'The Metropolis ‐reflections of modern urban life', and explores the diversity, dynamism and growth of the contemporary metropolis through an international collection with a central theme of city life representing a powerful shifting strand of contemporary culture