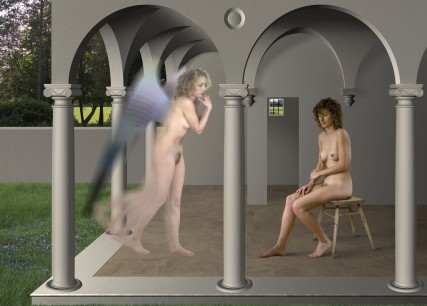 For the last few months of his life, Richard Hamilton was working with the National Gallery, London, on an exhibition of his own work. With Hamilton’s fairly sudden death last September, aged 89, the plans for this had a setback and the scope of the show had to be reduced. The title ‘Richard Hamilton The Late Works’ had already been decided, and indeed, that is what we get in this small but very enjoyable show.

To the end of his life, Hamilton remained engaged with both the work of his youth (vacuum cleaners referencing What Just Is It that Makes Today’s Homes So Different So Appealing? (1956) crop up repeatedly) and developments in the present, especially the use of the computer (he used Photoshop when creating many of these images). He also, crucially, remained engaged with the National Gallery and its collection, and with the work of Marcel Duchamp, on which he was an expert, using both for inspiration.

A Fra Angelico Annunciation, in San Marco in Florence, and the NG’s own painting of the same subject by Duccio il Buoninsegna clearly inspired Hamilton’s The Passage of the Angel to the Virgin (2007). But is there also a hint of Duchamp’s Nude Descending a Staircase in the repetition of the angel’s right leg, suggesting her rapid arrival in front of the seated Virgin? In any case, the Duchamp is clearly referenced in Hamilton’s Descending Nude of 2006, in which a nude model looks into a mirror and sees not just her present reflection but that of two more versions of herself, descending the stairs in the background.

The Passage of the Bride shows what seems to be a very shiny wall, on which the lower half (i.e. the ‘bachelors’) of Duchamp’s Large Glass (The Bride Stripped Bare by Her Bachelors, Even) appears and ‘behind’ that the reflection of a nude model – the ‘bride’. Hamilton, of course, created the copy of Large Glass that can be seen at Tate Modern.

Duchamp’s last work, Etants Donnés (1946–66) was only revealed in public after his death – a construction in which the spectator looks through a peephole to see the body of a nude woman, legs spread apart and holding a lamp in one hand. Hamilton wanted to produce his own ‘Etants Donnés’ and in his case it has taken the form of three images, Balzac (a), Balzac (b) and Balzac (c) – large, unfinished, works that gave the gallery some problems when it came to hanging them. In them, Poussin, Courbet and Titian contemplate the impossibility of recreating perfect human beauty in paint.

Unusually, the show has a very affordable catalogue. Priced at £9.99 it has useful, readable essays by the curator Christopher Riopelle, and Michael Bracewell (who writes specifically on the Balzac (a), (b) and (c) works). The show itself is free, though of course visitors are encouraged to make a donation. It will remain open until 13 January 2013, at the National Gallery, Trafalgar Square, London.

Richard Hamilton: The Late Works by Christopher Riopelle and Michael Bracewell is published by the National Gallery, London. 64pp, fully illustrated in colour, £9.99.