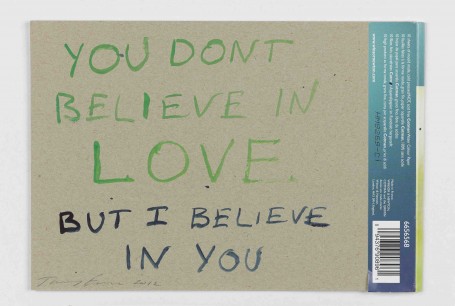 White Cube São Paolo is pleased to announce its inaugural exhibition, 'You Don't Believe in Love But I Believe in You' by celebrated British artist Tracey Emin. A versatile modern-day expressionist, Emin's intensely personal work blurs the boundaries between art and life. For this exhibition – her first in Brazil – she will present new works in a wide range of media including neons, sculptures, paintings, gouaches, mono-print drawings and embroideries.

Emin is a fluent narrator who often writes passionate and candid testaments of her thoughts, beliefs and aspirations that deeply resonate with her audience. The title of her exhibition is borrowed from a phrase that Emin painted on the back of one of her drawing pads in striking blue and green capital letters: a bold declaration of the pain of love and longing, a theme that underpins the entire show. This is echoed in Emin's earlier work, Those Who Suffer Love (2010), an animation that uses a stop-motion technique collated from over 300 of the artist's monoprint drawings to depict a woman masturbating, which has been described by the artist as 'a symbol of lust and loneliness'.

In her new series of self-portraits, consisting of loosely painted gouaches and finely stitched silk and wool embroideries, Emin uses a limited colour palette to depict an isolated female figure within a domestic setting, spatially framing the body against a chaise longue or at the foot of a bed. In his famous 'Blue Period', Picasso painted in shades of blues and greens to emphasize his personal melancholy;  Emin's neutral colour palette suggests the pain of separation and an anxious state of mind. In the group of works entitled 'Thinking of You' (2012), she depicts herself as a reclining, 'odalisque' type figure or as a meditative patient 'on the couch'. Drawn after photographs that Emin took of herself, they suggest a deliberate self-analysis and freshness in approach that is visible in their energetic mark-making. This is further demonstrated in a series of aquamarine gouaches and embroideries on calico, particularly in the Full Love (2012) triptych or in Deep Blue Mass (2012), where the figure almost flows off the edge of the picture, immersed in a subconscious tidal wave of thoughts and feelings.

Three sculptures punctuate the exhibition. Dead Sea (2012) employs a 'ready-made' stained mattress and has a lone branch, cast in bronze, impressed upon it. The work references one of Emin's most famous sculptures, My Bed (1998), but, in stark contrast to this earlier work which celebrated the artist's sexual identity through real life details, Dead Sea hints at a sexual desire set adrift. In Secret of the World (2012), a white, patinated bronze cast of a pomegranate, Emin suggests themes of ripe potency or of maturity with an inner beauty. Towering over the show, the sculpture Self Portrait with my Eyes Closed (2012) subverts the traditional bust genre, depicting a malleable profile with an averted gaze while in a magenta pink neon sculpture, Emin ardently states: I Don't Believe in Love But I Believe in You (2012).

Tracey Emin was born 1963 in London, where she currently lives and works. In 2007 she represented Great Britain at the 52nd Venice Biennale and she was appointed Professor of Drawing at the Royal Academy in 2011. Since her emergence as a 'young British artist' during the 1990s, Emin has exhibited extensively first showing with the British Council in Latin America at the Museo de Bellas Artes, Santiago, Chile in 2004. Her survey exhibitions include 'Ten Years' at the Stedelijk Museum, Amsterdam (2002) and 'Twenty Years', a touring exhibition at the Scottish National Gallery of Modern Art, Edinburgh, CAC, Malaga (both 2008) and Kuntmuseum Bern (2009). Recently she has had a mid-career survey exhibition, 'Love is What You Want' at the Hayward Gallery, London (2011) and a solo exhibition entitled 'She lay down deep beneath the sea' at the Turner Contemporary, Margate, Kent (2012).

An exhibition of Tracey Emin's early films, entitled 'How it Feels', will be on display at the Museo de Arte Latinoamericana de Buenos Aires (MALBA) until 25 February 2013. On Friday 30 November 2012 Tracey Emin will be in conversation with the curator of her MALBA exhibition, Philip Larratt-Smith, in association with the British Council São Paulo.