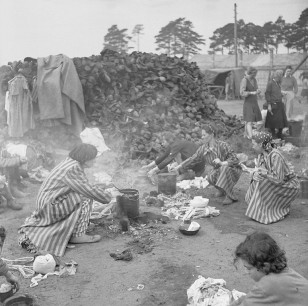 The experiences of people who endured Nazi persecution will be revealed through objects, sound, film and a specially commissioned artwork – on display for the first time at IWM North, part of Imperial War Museums – to mark Holocaust Memorial Day 2013 (27 January).

IWM North itself was designed by world-renowned architect Daniel Libeskind – whose own parents were Holocaust survivors – to represent a globe shattered by conflict. Libeskind’s design contains a sloping floor representing the curve of the earth. Daniel Libeskind commented:

My brilliant and fearless mother was a profound influence on my life. We are our parents’ children, and as someone who was born in the post Holocaust world to parents who were both Holocaust survivors, I bring that history to bear on my work.

The stories of individuals such as Sam Pivnik, who was interned in the Auschwitz-Birkenau death camp, are told in the new, permanent display. The display forms part of IWM North’s timeline of 20th-century conflict. Pivnik’s experiences are shared in his own words through a sound recording from IWM’s collections.

Pivnik was one of the ‘cleaning squad’ forced to collect the bodies of those who had died on the journey to Auschwitz. Visitors can see the belt he wore while in Auschwitz, as well as a piece of the electric barbed wire fence from the camp and timber from a destroyed gas chamber.A Union Jack badge is also on display, made by another Holocaust survivor to show his enthusiasm for Britain in the hope of being allowed to settle here.

Also on display is a new, specially commissioned artwork exploring how the Holocaust has shaped people’s lives for generations. Created by Manchester-based ceramic artist Chava Rosenzweig, the large, powerful installation contains hundreds of porcelain stars fired in a gas kiln.

The yellow star – based on the Star of David – was a symbol of pride for Jewish people turned into a symbol of humiliation by the Nazis.  The stars in the display are melted and distorted in the gas kiln – each one affected in its own unique way.

One of the stars bears the Auschwitz camp identity number given to Rosenzweig’s grandmother. All the other stars are blank, allowing viewers to consider how their own families have been shaped by 20th-century conflict.

The huge artwork, 4 metres in height, explores the impact of the Holocaust on second- and third-generation survivors, such as Rosenzweig herself.  It looks at how it has affected people’s identity and asks visitors to consider what it might be like to live with the legacy of the Holocaust.

Rosenzweig’s new artwork, called A Star Shall Stride, will hang on the wall of the Main Exhibition Space in the lowest, deepest part of IWM North.

It is the latest in IWM North’s ‘Artist’s Reactions’ series, where contemporary artists are commissioned to create new work in response to the themes and architecture of the building.  Chava’s use of stars was inspired by the many small, personal objects on display in IWM North, whose symbolic value is much greater than their monetary value.

Visitors can discover more by joining Rosenzweig on a special Meet the Artist Tour at 2.15p.m. on Sunday 27 January. Additional ‘Closer Look’ tours, at 2.15p.m. every day, 27 January – 1 February, explore items on display throughout IWM North’s Main Exhibition Space, from identity cards to the suitcase used by a Jewish family trying to escape persecution.

At 3.30p.m. on Sunday 27 January, there will be aspecial, free performance at IWM North,  by the Royal Northern College of Music,  of Steve Reich’s Different Trains.Reich was a Jewish composer who travelled across America by train during the Second World War. He realized that had he been living in Nazi Europe during this period, he might have been deported to his death by rail transport, a reflection which inspired him to write this piece.