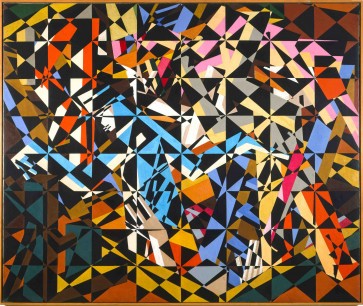 Dulwich Picture Gallery’s summer exhibition Nash, Nevinson, Spencer, Gertler, Carrington, Bomberg: A Crisis of Brilliance, 1908 – 1922 (12 June – 22 September 2013) will bring together some of the best and most innovative works by Paul Nash, C.R.W. Nevinson, Stanley Spencer, Mark Gertler, Dora Carrington and David Bomberg for the first time. It will examine the evolution of this influential group who became among the most well-known and distinctive British artists of the early twentieth century.

The exhibition will consider the influences and challenges presented to these six young artists during this dramatic period of history.  As their talents evolved, members of the group became linked with the Futurists, the Vorticists and the Bloomsbury Group, and befriended the leading writers and intellectuals of the day.   With the declaration of war in 1914, however, the comparatively comfortable world these six artists knew changed irrevocably. The exhibition will culminate with a selection of their paintings made during and immediately after the Great War, some of which are the most celebrated visual records of the epochal event.  The display will include Stanley Spencer’s acclaimed Unveiling Cookham War Memorial (1922), the first time it has been on display for almost 25 years.

All the artists were students at the Slade School of Art in London, and their contemporaries there included other such gifted and ambitious young talents as Adrian Allinson, John Currie, Maxwell Gordon Lightfoot, Ben Nicholson and Edward Wadsworth.  It was, as their teacher of drawing later called it, the school’s ‘second and last crisis of brilliance’.  The first ‘crisis’ had occurred over a decade earlier.  Then, between 1893 and 1901, the Slade’s crop of gifted young students had included Harold Gilman, Spencer Gore, Augustus and Gwen John, Percy Wyndham Lewis, Ambrose McAvoy and William Orpen.

The show features over 70 original works of art from public and private collections, including paintings, drawings and prints, as well as display cases of original letters, documents and photographs, highlighting the Slade artists’ complex and fascinating inter-relationships, and their mutual influences.  Their story encompasses passionate love affairs, suicide, war and even murder; the show will match the highs and lows of these times with the artworks produced by its protagonists.  A number of rarely seen works will be on display. These includeVoid (1918), one of Paul Nash’s very first oil paintings, now in the collection of the National Gallery of Canada in Ottawa, and The Sea Wall (1919), possibly the first in the series of watercolours he painted at Dymchurch after the war; two of David Bomberg’s vast early oil paintings, In the Hold (1913–14) and Study for 'Sappers at Work: A Canadian Tunnelling Company, Hill 60, St Eloi', (1918–19), described at the time as a ‘futurist abortion’; and Dora Carrington’s The River Pang (1918), painted shortly after she set up home with Lytton Strachey.

The exhibition is curated by David Boyd Haycock and is based on his group biography A Crisis of Brilliance: Five Young British Artists and the Great War, published to much acclaim in 2009.  InThe Guardian, Jenny Uglow wrote ‘We should call for a joint exhibition of their work, to complement the moving portrayal of their lives in this engrossing and enjoyable book’.  The inclusion of David Bomberg extends Haycock’s biography in this presentation, prompting a further consideration of how the group’s mutual influences developed.

‘A Crisis of Brilliance’ will include a wide range of works from major national collections (including Tate, the British Museum, the National Portrait Gallery, the V&A and the National Gallery of Canada); as well as from regional galleries in Birmingham, Leeds, Manchester, Oxford, Southampton and Barnsley; and important and rarely seen works from a number of private collections.

A major catalogue published by Scala in conjunction with the exhibition will include extensive historical analysis of the origins and the contemporary reception of the exhibited works, together with accompanying essays by David Boyd Haycock, Frances Spalding and Alexandra Harris.