Parr and Ray-Jones – a fascination with the English 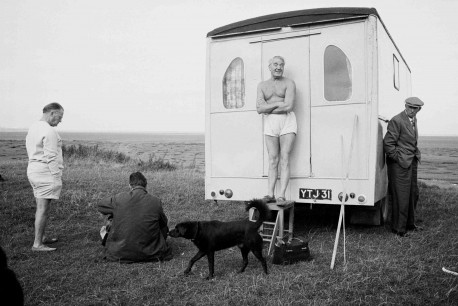 'Only In England: Photographs by Tony Ray-Jones and Martin Parr'

Nearly 50 previously unseen works by British Photographer Tony Ray-Jones go on display in first exhibition at Media Space, shown alongside early black and white photographs taken by Martin Parr in the 1970s on museum display for the first time.

The first ever major London exhibition of work by British Photographer, Tony Ray-Jones (1941–1972) is now open at Media Space, at London’s Science Museum. The exhibition features over 100 works drawn from the Tony Ray-Jones archive at the National Media Museum alongside 50 rarely seen early black and white photographs, ‘The Non-Conformists’, by Martin Parr (1952).

Between 1966 and 1969 Tony Ray-Jones created a body of photographic work documenting English customs and identity. Humorous yet melancholy, these photographs were a departure from anything else being produced at the time. They quickly attracted the attention of the Institute of Contemporary Arts (ICA), London where they were exhibited in 1969. Tragically, in 1972, Ray-Jones died from Leukaemia aged just 30. Nonetheless, his short but prolific career had a lasting influence on the development of British photography from the 1970s through to the present

In 1970, Martin Parr, a photography student at Manchester Polytechnic, had been introduced to Ray-Jones. Inspired by him, Parr produced ‘The Non-Conformists’, shot in black and white in Hebden Bridge and the surrounding Calder Valley. This project started within two years of Ray-Jones death and demonstrates his legacy and influence.

The exhibition draws from the Tony Ray-Jones archive, held by the National Media Museum. Around 50 vintage prints are on display alongside an equal number of photographs which have never previously been printed. Martin Parr was invited to select these new works from the 2700 contact sheets and negatives in the archive. Shown alongside these are Parr’s early black and white work, unfamiliar to many, which has only ever previously been exhibited in Hebden Bridge itself and at Camerawork Gallery, London in 1981.

Tony Ray-Jones was born in Somerset in 1941. He studied graphic design at the London School of Printing before leaving the UK in 1961 to study on a scholarship at Yale University in Connecticut, US. He followed this with a year-long stay in New York, during which he attended classes by the influential art director Alexey Brodovitch, and became friends with photographers Joel Meyerowitz and Garry Winogrand. In 1966 he returned to find a Britain still divided by class and tradition. A Day Off – An English Journal, a collection of photographs he took between 1967 and 1970 was published posthumously in 1974 and in 2004 the National Media Museum held a major exhibition, ‘A Gentle Madness: The Photographs of Tony Ray-Jones’.

Martin Parr was born in Epsom, Surry in 1952. He graduated from Manchester Polytechnic in 1974 and moved to Hebden Bridge in West Yorkshire, where he established the Albert Street Workshop, a hub for artistic activity in the town. Fascinated by the variety of non-conformist chapels and the communities he encountered in the town, he produced ‘The Non-Conformists’. In 1984 Parr began to work in colour and his breakthrough publication The Last Resort was published in 1986. A Magnum photographer, Parr is now an internationally renowned photographer, filmmaker, collector and curator, best known for his highly saturated colour photographs critiquing modern life.

‘Only in England: Photographs by Tony Ray-Jones and Martin Parr’ will run at Media Space, Science Museum from 21 September 2013 – 16 March 2014. The exhibition will then be on display at the National Media Museum from 22 March – 29 June 2014.

The exhibition is curated by Greg Hobson, curator of Photographs at the National Media Museum, and Martin Parr selected works from the Tony Ray-Jones archives.

The combination of Martin Parr and Tony Ray-Jones’s work will allow the viewer to trace an important trajectory through the history of British photography, and present new ways of thinking about photographic histories through creative use of our collections.

Tony Ray-Jones’ pictures were about England. They had that contrast, that seedy eccentricity, but they showed it in a very subtle way. They have an ambiguity, a visual anarchy. They showed me what was possible.

The Principal Founding Sponsor of Media Space is Virgin Media after whom the Studio will be named. A major donor to the project is the Dana and Albert R Broccoli Foundation set up by the family of the late Bond producer. Media Space has also received generous support in the form of donations or artworks from a large number of individuals, companies and artists.