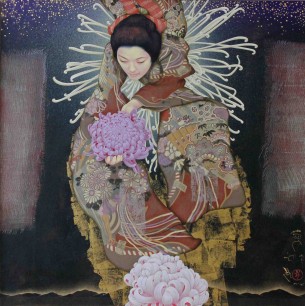 Gallery owner, Elena Shchukina has planned a new kind of gallery, which in her words, breaks away from ‘a traditional “white cube” format’, creating a living space filled with painting, sculpture, furniture, objets and even lighting, a sort of gesamtkunstwerk [total work of art] one might say with an oriental flavour, as the current exhibition is the first to show the Japanese artist Kyosuke Tchinai in the UK. He has previously exhibited four times in Paris. To launch the show, Elena Shchukina held a traditional Japanese afternoon tea - Cassone's contributor Clare Finn went along to report.

Kyosuke Tchinai's paintings are lushly detailed and highly decorative. Every flower stamen, vein, knot of tree bark and shimmering pattern on a kimono are depicted in minutiae. He combines various techniques that encompass a combination of painting, a great deal of textured and patterned gilding, stencil work and what may be a sort of monoprinting. Some of his canvas supports have squares of tissue pasted onto them making them reminiscent of shoji screens.

His work references the decorative style that is the hallmark of art in the Momoyama era (1573–1615). Robust, opulent and dynamic in style it was noted for its lavish use of gold and silver leaf. Tchinai’s art also makes extravagant use of gilding in both gold and platinum, but while he uses traditional motifs – chrysanthemums, butterflies and especially kimono-clad women – he does not illustrate traditional tales but creates enigmatic dreamscapes that along with the gallery’s ethos would be enticing to live with.

Tchinai’s paintings are displayed along with furniture, ceramic objets and are complemented with small abstract sculptures by the Hong Kong artist Katusha Ostroumoff Bull, who creates worksin a range of exotic stones: woodgrain pyrophyllite, Utah honey calcite, Argentinian Onyx. Bull creates pieces that appear fluid despite their hard material. They are to be observed over time, to be lived with so that the endlessly changing hues her materials display in various lighting conditions at different times of day and seasons create subtly shifting aesthetics on an intimate scale. They are described at sculpture to live with.