Last week of 'John Ruskin: Artist and Observer' in Edinburgh 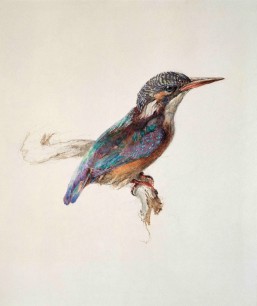 John Ruskin was an important theorist and critic of the art of his day, but he also created art himself. A fascinating show of his work is currently at the  Scottish National Portrait Gallery in Edinburgh, but it closes in a few days' time. Catch the last weekend of this exhbition - you have only until Sunday 28 September.

John Ruskin (1819–1900) is best known today as a writer and critic. His very individual, opinionated and often eccentric views on art and architecture, nature and landscape, economics and history, are still frequently quoted (though how many people actually read his books, with their beautiful but verbose prose?). Ruskin’s extensive output of detailed drawings and watercolours, spanning more than six decades, is less well known. Indeed, he is hardly regarded as an artist per se, as much of his work was made purely for his own use, much of it comprising unfinished studies created in order to work through his understanding of a subject or a view. Not surprisingly, his own lack of interest in their artistic merits has been shared by many historians and critics. But the current exhibition at the Scottish National Portrait Gallery provides a rare opportunity to see a sizeable selection of this work.

The selection demonstrates both Ruskin’s acute powers of observation and his quirky obsessiveness of mind, and their excellent condition imparts a freshness of appearance and shows fully the luminous brilliance of those in colour.  They span his lengthy artistic career, and cover the huge range of subject matter in which he was interested.

Paradoxically, the great precision with which Ruskin worked served, quite unconsciously, to express the strong emotional reactions he felt towards his subject-matter. He could be very cerebral and scientific in his observations, yet there is great sensuousness in these images, particularly in the details and colours of natural forms – he positively communed with their beauty.

Not a subscriber? Go to our Subscribe page and take advantage of a  one-weeek free subscription using the CASSTRY voucher code.