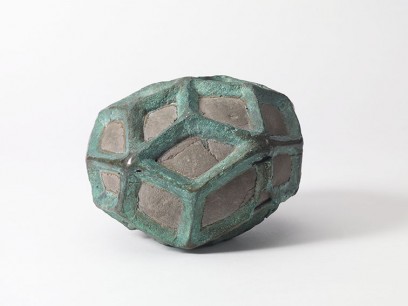 'Upside Down & Inside Out'

‘Upside Down & Inside Out’ is an exhibition of new and recent sculpture and works on paper by Peter Randall-Page that push traditional boundaries of making. Best known for his sculpture in stone, of which there are examples in public and private collections around the world, Randall-Page is also a prolific draughtsman and regularly works with other media, including ceramics, print-making and casting.

Randall-Page has a long-standing relationship with the foundry Pangolin Editions and this show includes a series of three new monumental bronze works exploring the relationship between growth and erosion. Randall-Page carved directly into the sand moulds taken from naturally eroded granite boulders, working from the inside out. In Randall-Page’s unique process, the carved indentations in the interior of the moulds become convex bulges. The uniform man-made tool used to create the indentations gives an effect that contrasts with the natural form of the original boulders, which is reminiscent of his earlier Theme and Variation series. Peter Randall-Page explains that he hopes his new works ‘are ambiguous and allude, by their form, to both erosion and growth’.

Of his interest in growth and erosion, Randall-Page muses
given a cast of a potato and a pebble, side by side, one would be hard pressed to distinguish between the two. Yet the processes, which produced them are diametrically opposite. The pebble a product of erosion, the potato the result of growth and expansion from within. Both seem to aspire to a minimum surface area to volume ratio but neither achieve a perfect sphere.

Carving and casting are arguably opposite processes: one being a removal of matter and the other solidifying form from a negative space. In his new cast bronzes, Randall-Page uses the ‘growth’ of the casting process alongside the ‘erosion’ of the carving process.

The creation process is also inverted in a series of new works on paper. Images created from dripping ink down paper are turned upside down to create organic tree-like forms that seem to grow up the gallery walls. By allowing the ink to take its own path Randall-Page returns to his preoccupation with chance and randomness, theme and variation. Like nature, the artist encourages chance into regimented patterns. The resulting branching patterns allude to the structure of plants and river deltas as well as neural and vascular systems. Philip Ball, who has written the essay to coincide with the exhibition, notes:

Peter’s works commonly come as a series: they are multiple expressions of a single underlying idea, and only when viewed together do they give us a sense both of the fundamental generating principle and its fecund creative potential. The diversity depends on chance, on happy accidents or unplanned contingencies that allow the generative laws to unfold across rock or paper in ways quite unforeseen and unforeseeable.

Upside Down & Inside Out will be Peter Randall-Page’s first show at Pangolin London since he staged the gallery’s inaugural exhibition in 2008. In 2007, in collaboration with the Ruwenzori Sculpture Foundation and the London Sinfonietta, Peter Randall-Page visited the remote island of Lolui in Lake Victoria to explore the prehistoric rock gongs and the ancient rock art. The rock gong’s direct connection with human evolution and the birth of music and art offered Randall-Page the inspiration to create a fresh new body of work that formed the exhibition.

This solo exhibition represents a rare chance to see works of different scales and media by an established sculptor who has produced a number of public commissions, two of which will also be unveiled in September. All artworks are available for sale, prices start at £420. A fully illustrated catalogue is available with an introductory essay by Philip Ball.

If you would like to try Cassone free for one week, please go to our Subscription/Register page and follow the instructions on screen, using the CASSTRY voucher to pay for your week's subscription