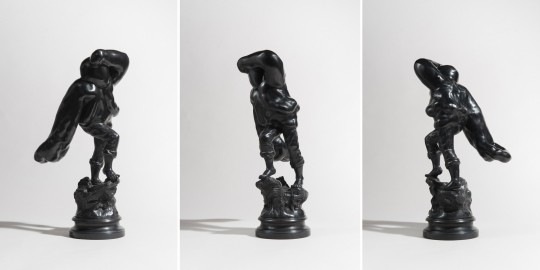 A man struggles bravely forward, his body braced against an invisible gale. It forces him to plunge, head first, into a dark and stormy night. What strange, heroic mission is he on? We may never know, for his face, arms, and upper body are obscured by an amorphous shroud, a thick bronze blanket. He is one of a host of bronze and marble sculptures exploring a history that is collapsing in upon itself – here at play is a modern debasement of what we know about classical sculpture. Kristin Hjellegjerde hosts ‘gleam’, a solo exhibition of work by Richard Stone, running from 12 September – 12 October. ‘gleam’ explores art history, from 19th-century Romanticism through to heroic realism, modernist sculpture, expressionism and abstract expressionism – a time of transition and transformation.

Stone’s previous works have included art made by dipping found antique porcelain or metal sculptures into heated, liquid wax to create strange, new hybrids, the material coating the figures until it obscured their original features. In doing so, he removed them from their original context to create new histories. Similarly, he would source antique paintings, sanding down the surface to create abstract pieces, taking traditional scenes and obliterating them in order to reveal.

Whereas earlier work was concerned with what Stone has called a ‘reversal of making’, this new series no longer sees Stone working with found objects as the main medium, but creating the object and its intervention together from bronze or marble. ‘The idea here is that art historical references can be seen to collide or collapse, so ultimately, it’s more uncertain where one reference or form begins or ends’, he explains. ‘The earlier figures had the distinction of wax and metal, a subversion of a found object and contemporary balancing of materials and context. The new figures are more distinct as new sculptural propositions.’ It is in taking the found object and the wax and uniting them in one material that Stone directs the viewer to read the sculpture as a completely new object.

So it is that The Rescuer, on his mysterious mission, and When History Falls Silent, The Future Will Fail hover between the classical and the contemporary, noble yet cartoon-like, a flawed creation. Indeed, Stone’s works are rich in literary and art historical references, from Tristan and Isolde to Cézanne;   he references artists such as Rodin,   Henry Moore and Thomas Schutte. “

The same treatment has been given to romantic landscapes, as evident in the bronze work When A Land Becomes A Sea, a craggy, menacing cliff face reminiscent of the iconic works of German Romantic painter, Caspar David Friedrich.Here, Stone once again subverts the landscape’s traditional meaning, taking out of the background to make it the subject itself. ‘I made this work with painting in mind’, he says. ‘The natural landscape has rarely been explored in sculpture on its own terms (except as a prop for heroic figures and public monuments), and I’m fascinated by this.’ Similarly, a marble flag, Only In The Ruins Will You Be Free explores the nature of flags and nature itself. Usually placed at a certain spot as a way of marking or claiming a territory, here, the material of the territory (stone, bedrock, a mountain) is used to make the flag. ‘The territory was always the mountains’, explains Stone. ‘The flag bearer has long been defeated; a heroic monument is left, delicately evoking the breeze and an absent figure in sculptural form. Nature wins.’

‘gleam’ will also feature a selection of large-scale paintings, combining the process of erasure used in earlier works with added painted elements. Together they create an immersive environment, a ‘melting away of ideals’ in which the viewer’s preconceived ideas of art history, traditional composition and narrative are stripped back in order to be rebuilt and reknitted into contemporary imaginations. ‘I like the idea that these works are reaching out towards a new Sublime’, says Stone. ‘Whereas a lot of artists that look to Romanticism are interested in looking in, at reproducing it, I’m looking out of it at the same time.’

Stone is a London-based artist who received an MA from Central Saint Martins. Recent group exhibitions and commissions include Ruins (with Saad Qureshi) at Kristin Hjellegjerde, London (2013) and Old Master Dialogues, Collyer Bristow, London (commission, 2013). Solo exhibitions include the end of England, Galleries Goldstein, London; new portrait capes, The Horse Hospital, London and a walk at dusk and dawn, Burgh House (all 2012). Stone is the recipient of numerous awards and prizes including a 2013 Arts Council England award for a significant phase of research and development as well as a Scholarship at Fonderia Mariana, Italy (2014) awarded by the Royal British Society of Sculptors and the Brian Mercer Charitable Trust. In 2012 he was a finalist for Anthology at CHARLIE SMITH London and shortlisted for the Beers.Lambert Contemporary Art Award. In 2011 he was selected for The Threadneedle Prize for Painting and Sculpture. His work is increasingly garnering attention with recent works included in Nature Morte, by Michael Petry, published globally in English, German and Dutch 2013 by Thames & Hudson, Hirmer and Ludion. His works can be found in collections in the UK, Europe and the USA.