Discover the work of Charles Rennie Mackintosh – in London! 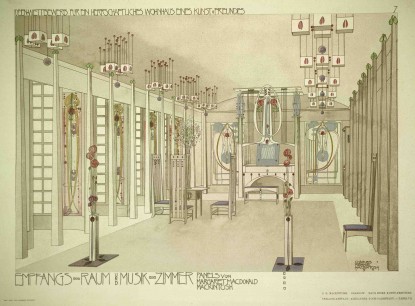 The Scottish architect, artist and designer, Charles Rennie Mackintosh (1868–1928) is celebrated worldwide, being especially well known for his Glasgow School of Art building, so badly damaged in last year’s fire. Yet during his lifetime his career was marked as much by its difficulties as by its successes, with many of his designs unrealized. ‘Mackintosh Architecture’ is the first exhibition to be devoted to his architecture and offers the opportunity to view over 60 original drawings, watercolours and perspectives spanning the whole of his career. Seen together they reveal the evolution of his style from his early apprenticeship to his later projects as an individual architect and designer.

From an early age, Mackintosh was an exceptional draughtsman. He became an architectural apprentice at the age of 16 and one year later embarked on a decade of evening classes in art and design at the Glasgow School of Art (then housed in Glasgow’s McLellan Galleries, Sauchiehall Street). He went on to become a partner in another firm.

On display will be a number of his exquisitely detailed, and highly characteristic, ink drawings for projects including the Glasgow Herald Building, Scotland Street School, The Hill House, Queen’s Cross Church and Windyhill.

The exhibition features Mackintosh’s original designs for the Glasgow School of Art, which he prepared at the early age of 29. A model showing a cross-section of the school and photographs of the external and internal details illustrate his early focus on designing every aspect of a building: the exterior, interior, furniture and lighting. Visitors can also watch film footage of the school.

The exhibition puts in context the environment in which he was designing these projects: the city of Glasgow and the opportunities and clients he found there; his apprenticeship and early collaborative work as part of an architectural practice, to his work an independent architect and designer; the inspiration he drew from traditional Scottish baronial architecture, and his collaboration with his wife, the accomplished artist and designer Margaret Macdonald. An example of their collaborative work can be seen in the 1901 ‘House for an Art Lover’ designs.

Highlights of the exhibition include Mackintosh’s stunning watercolours of the Daily Record Building and Glasgow Cathedral; a selection of models of built and unbuilt projects; a large oil portrait of Mackintosh, by the headmaster at the Glasgow School of Art, Francis Newbery and other photographic portraits.

Although internationally celebrated today, Mackintosh achieved little popular success during his lifetime.  The majority of his projects were realized between 1896 and 1909, after which he was frustrated by the lack of commissions and patrons, leaving many of his designs unrealized. The exhibition displays a number of his unbuilt designs, including artists’ studios in Chelsea, country lodges, the House for an Art Lover (subsequently built in Glasgow in the 1990s) alongside specially commissioned models.

Four contemporary artworks to complement the exhibitionare being shown in an adjacent space to the main Architecture Gallery. The projects – one audio piece, one poem and two animations – bring the creative spirit of Glasgow to 66 Portland Place. Some respond directly to Mackintosh’s masterpiece, the Glasgow School of Art. Others subtly evoke the artistic processes, techniques and style of Mackintosh. Collectively they enable connections to be made between Glasgow at the turn of the century and Glasgow today, where the art school continues to act as a key creative artery of the city.

‘Mackintosh Architecture’has been developed in association with The Hunterian, University of Glasgow. It marks the completion of a four-year AHRC-funded research project led by The Hunterian into Mackintosh’s architecture

The exhibition is part of a RIBA season of wide ranging events and workshops, designed for all ages and experience levels.