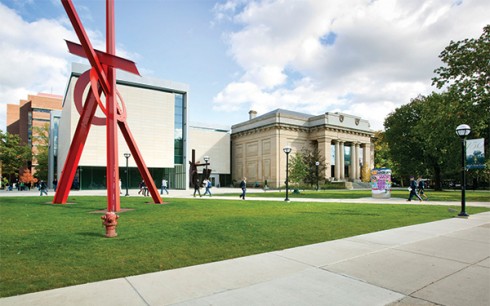 Nummer veertien, home, Dutch artist Guido van der Werve’s 54-minute film, weaves together three stories of journeys away from home: the death of Frédéric Chopin in Paris and his sister’s quest to bring the composer’s heart back to his native Poland for burial; van der Werve’s own quest to retrace, in reverse, the route of Chopin’s heart in a three-week, thousand-mile trek of biking, running, and swimming; and the story of Alexander the Great, a travelling warrior who is one of van der Werve’s personal heroes.

The film explores themes that are common in van der Werve’s work: extreme physical and mental endurance, man’s struggle with the intensity of nature, the interplay of history and geography, the power of melancholy, and the solitary traveller. The artist’s signature sensibility – simultaneously surreal and deadpan – is accentuated in the film by the full orchestra that accompanies him on every stage of his journey. Van der Werve spent a year composing the film’s score, a classical requiem for 40 voices and 20 strings, and the film’s structure mirrors that of the requiem: three movements of four acts apiece, with each act introduced by title shots to reinforce this organizational system. The tripartite framework underscores the three legs of van der Werve’s personal triathlon and the three odysseys that intersect and inform one another throughout the film.

Lead support for this exhibition is provided by the Herbert W. and Susan L. Johe Endowment.