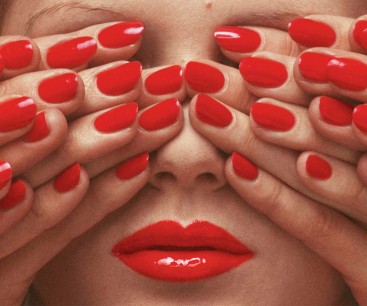 French photographer Guy Bourdin transformed fashion photography with his innovative, seductive images and a major exhibition at the Embankment Galleries, Somerset House, London, shows that his photographs are as relevant today as they were at any time during his distinguished 40-year career.

A protégé of the celebrated photographer and visual artist, Man Ray,  he worked for Paris Vogue for over 30 years, from 1957 to 1987, contributing highly original editorial fashion shoots and covers.  But it was his inspired advertising campaigns for French shoe designer, Charles Jourdan, during the ’60s, ’70s and ’80s, that caught both the fashion and public eye and had the shoe industry standing smartly on its toes.

‘Guy Bourdin: Image Maker’is the largest-ever exhibition on this influential and enigmatic photographer. It features over 100 colour photographs and previously unseen material from his estate including paintings, working drawings, sketches, and notebooks.

A self-taught painter, Bourdin was well-known as an artist before he became a fashion photographer, his 'artist’s eye' was an ever-present influence on his photography, and his editorial and advertising imagery remain a high point in late-20th-century fashion photography.  His work took the basic function of a fashion photograph – to sell clothing, beauty, accessories – and turned it into something rich and strange. Dispensing with the idea that the product should be the key subject in an image, he made it secondary, inventing an eye-catching narrative around it.

This is clearly illustrated in his campaigns for Charles Jourdan and a highlight of the exhibition is the surreal photographs from the ‘Walking Legs’ series, commissioned by Jourdan in 1979, and exhibited here for the first time in their entirety, together with a previously unseen accompanying fashion film.

In fact, a model wearing a pair of shoes as a type of promotional image was a preoccupation with Bourdinthroughout his career.  By the mid-1970s his Jourdan campaigns had acquired a reputation for being highly distinctive and visually ingenious.  For the 1979 campaign he decided he would simplify his approach and embark on a tour of Britain. He dispensed with his studio and the use of a model, deciding on a pair of mannequin legs, cut off just below the knee, as the visual idea and a stand-in for a woman, wearing a range of Charles Jourdan shoes in various different locations.

Having recently bought a black Cadillac...Cassone subscribers click here to read on

Not a subscriber yet?  Click here and try Cassone free of charge