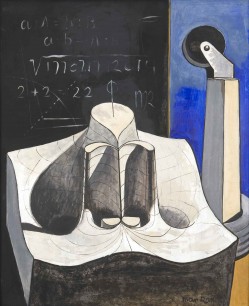 The Phillips Collection, Washington DC  explores the tntersection of art and science in ‘Man Ray – Human Equations: A Journey From Mathematics To Shakespeare’  – on now until 10 May 2015

This exhibition displays together for the first time Man Ray’s photographs and paintings with the mathematical objects that inspired them.

‘Man Ray—Human Equations: A Journey from Mathematics to Shakespeare’ explores the intersection of art and science that defined a significant component of modern art on both sides of the Atlantic in the first half of the 20th century. Highlighting the multimedia work of the legendary Surrealist artist, ‘Man Ray – Human Equations’ is on view until 10 May 2015.

Working in Hollywood in the late 1940s, Man Ray  (American, 1890–1976) created his ‘Shakespearean Equations’, a series of paintings that he considered to be the apogee of his creative vision. Drawing upon photographs of 19th-century mathematical models that he took in the 1930s, the series was a culmination of 15 years of multimedia work. Featuring more than 125 works, ‘Man Ray – Human Equations’displays side-by-side for the first time the original plaster, wood, papier-mâché, and string models from the Institut Henri Poincaré (IHP) in Paris, Man Ray’s inventive photographs of these unusual forms, and the series of ‘Shakespearean Equations’ paintings they inspired.

Although nearly every significant Man Ray exhibition since 1948 has included at least one of the Shakespearean Equations, no publication or exhibition has ever brought all three components together for an in-depth study, says exhibition curator Wendy Grossman.

In fact, Man Ray never witnessed the triangle of mathematical object, photograph, and painting displayed as an ensemble. Placed in context with his other paintings, photographs, and objects, these works illustrate the artist’s proclivity to create art across media that objectifies the body and humanizes the object, transforming everyday materials into novel forms of creative expression.

The exhibition’s diverse works – including 70 photographs, 25 paintings, eight assemblages or modified ‘readymades’, and 25 original mathematical models – juxtapose Man Ray’s Surrealist-inspired photographs of mathematical models and the associated ‘Shakespearean Equations’ paintings within the larger context of the role of the object in the artist’s work. This is evidenced by other canvases, photographs, and objects – both celebrated and little-known – linking his wider artistic practice with the ‘Shakespearean Equations’ project and casting these accompanying works in a new light.

‘Man Ray – Human Equations’sheds light on the development and appreciation of new art forms at the heart of the art/science matrix and the growing acceptance of photographs as works of art in their own right. The exhibition investigates the journey crossing two decades and two continents that brought the artist from mathematical models to ‘human equations’ and, ultimately, to the translation of Shakespeare’s plays into an amalgamation of these elements.

From photograph to painting

In 1934, Man Ray, already established as a leader of the Dada and Surrealist movements, visited the Institut Henri Poincaré in Paris to see a collection of three-dimensional mathematical models, made in the second half of the 19th century to illustrate geometrical properties for the investigation and teaching of algebraic equations.

Man Ray accepted a commission from art historian Christian Zervos to take a series of photographs in preparation for the 1936 issue of the magazine Cahiers d’Art devoted to the ‘Crisis of the Object’. In so doing, he transformed their appearance through innovative lighting and composition, highlighting forms that would be intriguing, dramatic, suggestive, and disturbing to the observer. His photographs exploited the viewer’s propensity to seek out readily recognizable human forms, emphasizing human and anatomical associations.

Man Ray’s photographs captivated his Surrealist colleagues and art historians and contributed to the debate regarding the importance of the Object  that was becoming increasingly integral to contemporary developments in Surrealism.  In 1936, 12 photographs were illustrated in Cahiers d'Art and his original photographs were displayed in major Surrealist exhibitions, including the ‘International Surrealist Exhibition’ in London, and ‘Fantastic Art, Dada and Surrealism’ at The Museum of Modern Art, New York.

In 1937, Man Ray published La Photographie n’est pas l’Art, L’Art n’est pas de la Photographie, a manifesto that would signal his abandonment of photography as his major artistic and commercial endeavor. This new direction reflected his renewed interest in painting in France and later engagement with object-making in Hollywood. At the start of the Second World War, Man Ray fled France and returned to the USA, eventually settling in Hollywood in late 1940. Having been forced to leave the majority of his work behind, he set about repainting some of his most emblematic Surrealist paintings of the late 1930s. Even without having his photographs of the mathematical objects in his possession, the influence of geometry and mathematics remained prominent in Man Ray’s work.

During a brief trip to France in 1947, Man Ray retrieved much of his pre-war artistic output and shipped many works back to the USA. These included his photographs of the mathematical models that would inspire an ambitious series of new paintings, signalling a return to figurative ‘non-abstraction’ painting. Ultimately dissatisfied by the typically Surrealist titles that the leader of the Surrealists, André Breton, suggested in 1936 for the corresponding photographs, Man Ray instead assigned the title of a celebrated play to each canvas and named the series ‘Shakespearean Equations’. Man Ray considered this series his ‘final realization of the mathematical equations’. Indeed, these 20 canvases arguably comprise the final important series of paintings by the artist and clearly reflect his affinities with Surrealism.