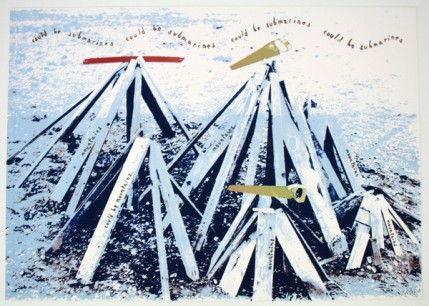 We're all against war. But what are we for? Peace, we say. What is peace? Nobody quite knows.

Richard Saltoun Gallery is celebrating the 30th anniversary of the ‘THE ART-OF-PEACE BIENNALE’, which took place at the Kustverein in Hamburg, Germany, in 1985.

‘The Last Art-of-Peace Biennale’ does not restage the earlier exhibition but gathers some of its artists together to represent its spirit and understand its context. Curated around Filliou's key work 7 Childlike Uses of Warlike Material (1970) the exhibition also includes works by Joseph Beuys, Henning Christiansen, Barry Flanagan,  Sol LeWitt, Tony Morgan, Wolf Vostell, and Franz Erhard Walther. Important works include Sol LeWitt's Proposal for Walldrawing (1985), which invites visitors to draw on the walls of the gallery and was featured in the 1985 exhibition.

The consultant curator is Roddy Hunter (b.1970, Glasgow, Scotland), an artist, curator and educator. He is the self-appointed curator of ‘The Next Art-of-Peace Biennale, 2015–17’, resuming the project conceived by Robert Filliou and René Block in 1985. He is associate professor and director of programmes in fine art at Middlesex University, London.

Richard Saltoun Gallery is grateful to the Sol LeWitt Foundation and the Bertrand Russell Peace Foundation.