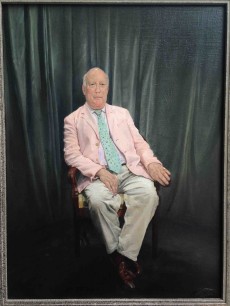 To be opened by Sue Lawley at 12 noon on Thursday 16 April.

This annual exhibition shows over 200 portraits by over 100 artists and celebrates the diversity of this fascinating genre. It also shows the popularity of commissioning painted portraits by institutions and individuals.

Prizes awarded by the Society include the Ondaatje Prize for Portraiture, the Prince of Wales Award for Portrait Drawing, the Changing Faces Prize and the de Laszlo Foundation Prize. There will be a new prize, the Seven Investment Management £15,000 ‘Conversations’ Prize for a scene of ‘two or more characters interacting with each other and/or the viewer’. Twenty shortlisted works will be on show, and the Winner of the £15,000 first prize will be announced at the Private View.

Two previous prize winners, Sarah Jane Moon and Emma Hopkins, have been invited back for a mini-residency, ‘Inside Portraits’, in order to experiment with alternative ways of sharing their work with audiences, giving the public a better insight into their individual practices. Multidisciplinary works interact with the 19th century architecture of the space, creating an immersive environment, exploring the relationship between painting, new media and other disciplines. Both artists will be present throughout the exhibition to meet visitors and discuss the hidden stories behind their artworks.

There will also be a special showcase of works from the Society’s growing permanent collection ‘People’s Portraits’ to celebrate the 15th anniversary. The full collection is usually on permanent display at Girton College, Cambridge,

Since 1891 The Society has been devoted exclusively to the art and development of portrait painting. The selection of work on display, both from its members and the open section, make it the perfect destination for those wishing to commission a portrait. Portraiture is a fascinating barometer of current trends and holds a mirror up to nature in reflecting life in contemporary Britain.

The exhibition runs from 16 April to 1 May from 10am to 5pm. Tuesdays open until 7pm.

The Royal Society of Portrait Painters is supported by Mall Galleries, The Mall, London, SW1.


To read the rest of Cassone free of charge, follow this link  and subscribe from that page.