Art centre recognized among charities of the year 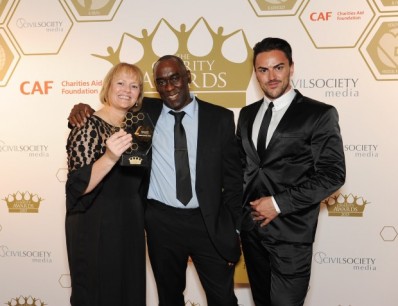 The Lowry, Salford's innovative arts centre,  has been named one of the top charities in the country – picking up the award for ‘arts, culture and heritage’ at the prestigious Charity Awards 2015.

The Charity Awards 2015 took place at the Park Plaza Westminster hotel in London on Thursday, 18 June. Collecting the award on behalf of The Lowry were chief executive, Julia Fawcett OBE, and development director and deputy chief executive, Stephen Crocker.

The Salford arts centre was commended by judges for its work over more than a decade to reach out to its local community to build a long-term relationship with people who had not previously engaged with the arts.

The judges noted how a succession of projects and activity, including the ‘Walkabout Project’ in 2006, the Centre’s annual Focus Projects – which have worked with young parents, carers and children with autistic spectrum condition – and the popular Our Lowry ticketing scheme have helped to break down barriers to people engaging with the arts.

Julia Fawcett OBE, chief executive of The Lowry, said:
This is a really important award for us. When The Lowry opened in 2000, researched showed that people’s perception of the arts in the immediate area of the Centre was that it was expensive and not ‘socially accessible’ to them.
We set about changing that by ensuring our performing and visual arts programme always had a strong emphasis on learning, inclusion and diversity. We’ve also given over 50,000 free and discounted tickets to Salford residents through the Our Lowry scheme.
People, quite rightly, aren’t convinced overnight – but we know there has been a 50% increase in the number of visits to the centre by local residents since 2011 – so we’re clearly moving in the right direction.
To be recognized at the national Charity Awards is an incredible honour and will only further strengthen everyone at The Lowry’s ambition to make the arts even more accessible.

Tania Mason, group editor at Civil Society Media - which organizes The Charity Awards said:
In this age of continuing pressure on public finances, the work of Britain’s charitable sector is more vital than ever.  All the charities shortlisted at this year’s Charity Awards have demonstrated the highest standards of leadership and management, and so it follows that the work carried out by The Lowry, our arts, culture and heritage winner, is really quite exceptional.
The team at The Lowry should be very proud of themselves and we only hope that this accolade propels them on to even bigger and better things. Congratulations to everyone involved.