The playful side of Brutalism 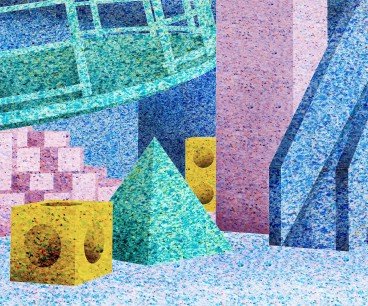 This summer the RIBA will present ‘The Brutalist Playground’, an exhibition that is part sculpture, part architectural installation, which invites people of all ages to come and play, the Brutalist way. Occupying the entire Architecture Gallery, the immersive landscape is a new commission by Turner Prize-nominated design and architecture collective Assemble and artist Simon Terrill. It explores the abstract concrete playgrounds that were designed as part of post-war housing estates in the mid-20th century, but which no longer exist. They became playgrounds unsuitable for play.

The exhibition draws on features from a number of London estates including Churchill Gardens, Pimlico; the Brunel Estate, Paddington; and the Brownfield Estate in Poplar. The playgrounds were often made from concrete, cast into sculptural forms, which presented a distinct move away from previous playground design. They were envisaged as a key aspect of the estate layout and design and as such reflect the preoccupations and social theories of society at that time. Brutalism was a particularly severe form of modernist architecture seen in Britain the 1960s – a prominent example is the Economist building in London.

Assemble and Simon Terrill have drawn inspiration from photographs and visual material in the RIBA’s collections, documenting the playgrounds when they were newly built and in use.  The exhibition installation will recreate visual elements from the playgrounds in reconstituted foam, creating an interactive, contemporary space where the viewer becomes participant and in this way completes the work.  Archive images of the original playgrounds will be projected on the walls.

Assemble commented on the creation of the installation:
The challenge of reconstructing elements of now forgotten Brutalist play structures within the RIBA gallery is an exciting opportunity for us to explore contemporary issues surrounding play, by looking at the often surreal objects from the past. Working closely with the RIBA collections and the artist Simon Terrill, the interpretation of these spaces has allowed us to ask questions around materiality and the nature of risk in play, while also giving greater visibility to the incredible original images of the playgrounds that can be found in the collections.

Artist Simon Terrill said:
The original playgrounds evoke a disappearing world of concrete mazes and windswept walkways. Like a Brechtian stage set rendered in concrete, they speak to a time before soft play and highly regulated public space. The recreation of these forms is a kind of inverted hyper-Brutalism. Playable structures revelling in the sharp-edged bush-hammered concrete forms they reference. The surreal edges of the Brutalist aesthetic are seen here in the form of the playground.

‘The Brutalist Playground’ will be accompanied by a public programme of talks, debates and film screenings as well as workshops and events for families.

Part of the London Festival of Architecture.