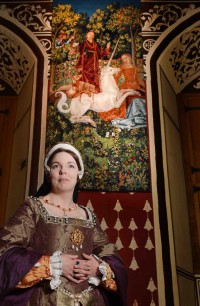 The Mystic Hunt of the Unicorn, created by weavers at West Dean Tapestry Studio, part of the internationally renowned College, was unveiled today at Stirling Castle, Scotland. The art tapestry is the final in a series of seven works hand woven over 14 years and commissioned by Historic Scotland to recreate The Unicorn Tapestries (149 –1505) held in the Metropolitan Museum of Art, New York, as part of a refurbishment at Stirling Castle. The originals were given to the Metropolitan by John D. Rockefeller in the 1930s.

The West Dean weavers worked in two teams: one based at the College in Chichester; the other in a purpose-built studio at Stirling Castle. Studio Master Weaver, Katharine Swailes worked on the whole new series The Hunt of the Unicorn project from the beginning.  Swailes previously worked with Tracey Emin on Rose Virgin (2011) and further significant commissions.

The opportunity to work on such a unique project was not expected, and was full of surprise and learning. Stepping in the path that weavers had taken 500 years before was thrilling, to investigate not only the image but the working practice of a weaver at the loom. It was an unique project and I am so pleased to have been part of it.

Royal inventories at Stirling Castle show that James V of Scotland owned over 100 tapestries, though there is no record of what happened to them. The tapestries woven by West Dean Tapestry Studio, the only professional studio in the UK, are part of a project to recreate the interiors of the palace to how they may have looked in the 1540s when it was home to Mary, Queen of Scots, the daughter of James V.

The venture is the biggest weaving project undertaken in the UK for 100 years and brought together an international team of weavers. The bespoke palette of colours and tones for the yarns were dyed in West Dean studio’s dye laboratory. The artworks were deconstructed and the most important colours identified and matched using the studio’s recipe books as a reference. It was essential to have all the yarns dyed at the outset in order for the weavers to begin to work out the different combinations of threads that made up the palette of mixes for weaving.

The Hunt of the Unicorntapestries are steeped in myth and allegory, not only the elaborate rituals of the medieval hunt and court etiquette but pagan and Christian iconography. Pictorial tapestries were the most expensive and highly prized of the decorative arts in the Middle Ages and tapestries were the ultimate status symbol denoting wealth and importance.

West Dean College, known internationally for Creative Arts and Conservation, is the only college offering full-time postgraduate study in Tapestry and Textile Art in the UK. The College is hosting a Tapestry Symposium next month (31 July 2015), which will explore the status of hand woven tapestry within the context of contemporary art and craft practices. Speakers will include Professor Lesley Millar, director of the Anglo Japanese Textile Research Centre at the School of Craft and Design; and Yvonna Demczynska, founder and curator of Flow Gallery in Notting Hill, a consultant for the Crafts Council. West Dean Master Weavers Philip Sanderson, shortlisted for the John Ruskin Prize, and Katharine Swailes, who worked on The Hunt of the Unicorn tapestries, will also be speaking.

West Dean Master Weavers curated an archive of the weaving venture which forms part of an exhibition ‘Weaving the Unicorn’ which runs at Stirling Castle until spring 2016.