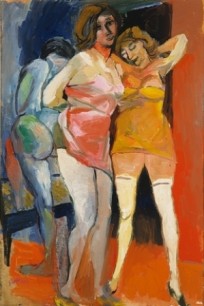 From Morandi to Guttuso: Masterpieces from the Alberto Della Ragione Collection

When art critic Fortunato Bellonzi and dealer Ettore Gian Ferrari assessed Alberto Della Ragione's collection on behalf of their city council in October 1968, the collection was estimated to be worth 700,000,000 lire. Entire walls were covered in paintings, and sculptures formed part of the décor. Their report described the location of the works in various rooms of Della Ragione’s house at Quarto near Genoa, from the entrance hall to the second floor, in the stairwell, the study, the office and the landings. In the two principal rooms were hung groupings of works by Guttuso, Casorati, de Pisis, Rosai and Morandi, while in the studio were works by the artists of the anti-fascist Corrente movement (Birolli, Vedova and Mafai) alongside ‘aeropaintings’ (a form of Futurism) by Prampolini.

From Morandi to Guttuso: Masterpieces from the Alberto Della Ragione Collection accompanied an exhibition shown earlier this year at London’s Estorick Collection of Modern Italian Art.

The book brings to light the man behind the collection and certainly goes a long way to explain why Alberto Della Ragione (1892–1973) selected particular works, whilst also describing the social and political climate that influenced both his taste in art and the artworks themselves.

Delle Ragione’s collection represents his taste in the painting of the 1930s and ’40s and the book is not a comprehensive overview of Italian modern art from the turn of the century to the 1970s, as the title suggests. It includes only around 40 of over 260 works in the whole collection. Even so, it is true that the dominant themes of the collection reflect traditional subjects, such as landscapes, still lifes and portraits.

The book’s greatest success is in establishing a sense of the collector’s personality and intimate relationship with the art that he owned. This is shown most effectively by the images of Delle Ragione in his home in Quarto, surrounded by his works. These are contrasted with images of the pictures on display at the Palazzo Bombicci in Florence, where they were first exhibited in 1970. Readers thus have the opportunity to compare the pictures in their original context with their gallery setting, which is invaluable in establishing a profile of the collector.

Realising that abstraction was on the rise, Delle Ragione wished to expand his understanding of modern works. He had a truly philanthropic nature. Not only did he support artists by buying their work, but he also  funded the opening of galleries, provided stipends for artistic projects and publications and dared to buy works that were shunned under the fascist regime.

The socio-political climate in Italy underwent major changes during Della Ragione’s lifetime, from the fascist Futurists who celebrated the machine age to the Social Realists, such as Renato Guttuso, a communist and an anti-fascist partisan. For the most part, the works represent the ‘return to order’ after the First World War, a time when artists who had previously experimented with abstraction returned to a more figurative approach in its aftermath.

For example, Carlo Carrà (1881–1966), best known for this Futurist works, subsequently experimented with Metaphysical art, the Italian version of Surrealism, before he began to demonstrate a more figurative approach to painting. It is this later, traditional style that is represented in the exhibition, specifically in the painting, Bathing Huts by the Sea (1941). Another example by fellow Futurist, Gino Severini (1883–1966) who, like Carrà, returned to traditional subjects, as in his watercolour, Window with Pigeons (1930-31), a still life staged in front of an open window.

There are few examples of non-traditional styles, for example, representing Futurism; arguably, the star of the show is Fortunato Depero’s Neighing at Speed (1932). Depero’s metallic-looking red horse, convincingly thrusting forward, breath visible as it exerts itself, resembles a machine or a child’s toy rather than an actual horse: perfectly in tune with the Futurist agenda. Another stand-out piece of Metaphysical painting is Giorgio de Chirico's Les bains mystérieux (1934–6) in which three men with towels around their waists enter a pair of doorways that are surreally ambiguous.

An introduction by Estorick Director Roberta Cremoncini is followed by an essay by curator Laura Lucchesi of the Civici Musei e Chiese in Florence, which introduces the collection and its history as well as a short biography on Della Ragione revealing the inspiration behind his role as both patron and art dealer. Most enlightening is Lucchesi’s explanation of the collector’s involvement with Corrente, an anti-fascist Milanese group of which artist Renato Guttuso was a key member. The majority of the book comprises images, making it good for those interested in the particular works shown and it perhaps serves best as a collector’s item.

The Estorick Collection of Modern Italian Art can be visited at 39a Canonbury Square, London N1 2AN. It has a substantial library that is open to the public by appointment (fee payable).

Books on Futurism include Futurism by Caroline Tisdall and Angelo Bozzola (Thames and Hudson paperback, 1978). Catalogues for previous exhibitions at the Estorick Collection can be obtained from the gallery's own shop.

The book From Morandi to Guttuso: Masterpieces from the Alberto Della Ragione Collection is available from the book shop of the Estorick Collection of Modern Italian Art. Telephone +44 (0)20 7226 3043