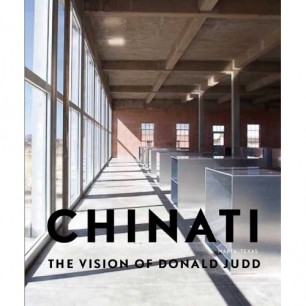 In 1995, the BBC presented ‘Big Art In a One-Horse Town’, a documentary on projects that artist Donald Judd had undertaken in the tiny, high-desert town of Marfa, Texas, situated near the Mexico border. Judd had died the year before, leaving behind an extraordinary collection of artworks by himself and some of his peers, installed in spaces that were devoted exclusively to their permanent display. Attracting visitors from around the world, the installations comprised a precedent-setting museum, owned and administered by The Chinati Foundation / La Fundación Chinati.

Judd (1928–94) was born in a small town in Missouri and served as an engineer in the US Army during the Korean War. Afterwards, he studied philosophy at the College of William and Mary, earned a higher degree in philosophy at Columbia University, and did postgraduate work in art history there, as well. Judd then stayed in New York, to live and work, for about 20 years. In the 1970s, he began relocating to Marfa.

He bought property privately, and furthermore obtained patronage that allowed acquisition of Fort D.A. Russell on the outskirts of town, as well as one or two buildings in town. The ex-military property now is home to breathtaking installations of Judd’s work, along with works by Carl Andre, Ingólfur Arnarsson, Dan Flavin, Roni Horn, Ilya Kabakov, Richard Long, Claes Oldenburg and Coosje van Bruggen, David Rabinowitch, and John Wesley. A splendid installation of sculpture by John Chamberlain is found in the former headquarters of the Marfa Wool & Mohair Company. Another in-town building, the Ice Plant, is used for Chinati symposia and other programmes.

Although both books reviewed here provide and elaborate upon this background, they differ in David Raskin’s philosophical and political emphasis, and Marianne Stockebrand’s focus on documentary narrative, which is enlivened by her often-poetic descriptions of Chinati’s collection.

Raskin stimulates the desire to learn more – about Judd, but also about the writings of John Dewey, William James, and Henri Bergson, among other philosophers. Raskin also reignites one’s realization of the radicalism and freshness of Judd’s work. He addresses Judd’s empiricism as a dynamic and liberating departure from a contemporary preoccupation with methodology. Besides inspiring new appreciation of Judd’s art, Raskin also gives thorough consideration to Judd’s ideas about community and about effective living – ideas blending a leftist condemnation of war and environmental degradation with arguments for limited government that would win conservative praise on both sides of the pond.

As chair of the Department of Art History, Theory, and Criticism at the School of the Art Institute of Chicago, Raskin primarily writes for scholars. His text will serve as a valuable reference book, thanks not only to his essays but also to the bibliography and in-depth endnotes, as well as for reproduction of several Judd documents pertaining to community organizing, and colour reproductions of related works by other artists.

Conversely, Stockebrand is a curator and museum director, one whose responsibilities balance ensuring conservation of a collection with providing public access to it. She became the Chinati’s director upon Judd’s death and held the post for 17 years: Thomas Kellein, former director of Kunsthalle Bielefeld, succeeded her last January. Stockebrand’s brief as editor and primary writer for Chinati: The vision of Donald Judd is to comprehensively record and communicate the history, values, and experience of Chinati. Selected projects owned and administered by the Judd Foundation, which received the artist’s estate, are also featured. Along with insightful essays by Rudi Fuchs, Thomas Kellein, Sir Nicholas Serota, Richard Shiff and Rob Weiner, Stockebrand’s writings complement a trove of glorious new installation photographs, bibliographies for all the artists, a catalogue of the collection and several other illustrations and appendices. Consistent with Judd’s belief in cultural action and production as part of a gesamtkunstwerk, the book’s design and content seamlessly merge with Chinati’s overall aesthetic.

Between them, Raskin’s lively reconsideration of Judd’soeuvre and Stockebrand’s definitive monograph on the Chinati Foundation /la Fundación Chinati are valuable books on a pioneering artist. David Raskin’s Donald Judd is geared towards academics and undergraduates in the humanities; Marianne Stockebrand’s Chinati: The vision of Donald Judd should satisfy those groups but draw in the general reader, as well.

Donald Judd (1928–94) is generally regarded as one of the most important post-war sculptors and as working within the Minimalist movement, a term he himself disliked. He began to paint in the 1940s. By the 1960s, having turned to sculpture, he became known for his ‘stacks’ and ‘boxes’ made of metal, Plexiglas, plywood and concrete. These involved industrial-style construction processes. Later his work became larger, including substantial installations. Judd rejected illusion and representation in art, being more concerned with exploring space, colour and volume.