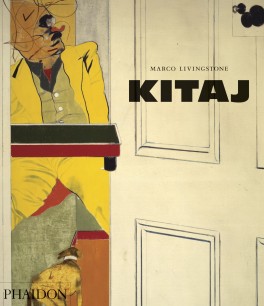 R.B. Kitaj (1932–2007) was born in Ohio and started his artistic life in New York. Widely travelled and widely read, Kitaj arrived in Britain in 1958 to study at Oxford (and later at the Royal College of Art) before settling in London, where he lived until 1997, with lengthy periods in France, Spain and America. His best known works are painted montages of figures in pictorially complex imagined settings, often blending genres and including identifiable figures from history. His painted figures have a tendency towards tinted drawings, boldly coloured but shaded in black rather than composed of blended colours. The collision of styles (graphic, diagrammatic, cartoon, photographic, realist) is not postmodern. Rather, it is the montage modernity of the poetry of Ezra Pound and T.S. Eliot.

Kitaj was a gifted draughtsman and excellent pastellist, as the many examples illustrated in Marco Livingstone’s book demonstrate. His pastel nudes display emphatic yet supple outlines and delicate shading against powerfully rich supporting colour. One could summarise Kitaj as fluctuating between two polar opposites: the forensic intimacy of Degas and the allusive symbolism of the German figurative artist, Max Beckmann. (Curiously, the author fails to mention the latter figure.)

Out of all of the School of London (the most significant figures being Andrews, Auerbach, Bacon, Freud, Hockney, Kitaj and Kossoff), it is Kitaj who is perhaps the most rewarding for young artists to study. The others are too mannered (Freud and Kossoff), too peculiarly individual (Bacon and Auerbach) or too lightweight to be good role models. The Room (rue St Denis) (1982–3) shows a plain red bed confined in a tiny sparsely furnished room. It is crisp, concise and touching, more so when one learns this was the working room of a Parisian prostitute. Kitaj is often at his best at his simplest. Marynka Pregnant II (1981) captures well the bulge of the stomach and faint veins of the breasts. The portrait drawings strike a balance between being forceful works of art and objective records.

In 1994 Kitaj was the centre of the most vicious and bitter controversy in the British art world for many decades. Kitaj’s retrospective at the Tate Gallery received a number of very negative and personal reviews. In essence, Kitaj was criticised for being obscure in his references, pretentious and overly prescriptive about interpreting his pictures, partly owing to his written introductions to paintings printed in the catalogue (many of them reprinted in this book). Shortly after the exhibition closed Kitaj’s wife died at the age of 47 of a brain aneurysm, which he attributed to the stress of the controversy. He publicly lambasted his critics and in 1997 returned to America to live in Los Angeles permanently.

So toxic was this dispute that it contaminated much of what was written about his art and conditioned the reception of subsequent exhibitions. Perhaps the time has now come to look at the art in a more dispassionate and less partisan manner. On reflection it is clear both Kitaj and his critics were correct. Kitaj could be needlessly arcane in his references and too pleased with his own (admittedly formidable) learning and this does detract from appreciating his achievement. It is also true that Kitaj was a victim of the knee-jerk anti-intellectualism common in Britain, and of irrelevant personal attacks.

From the early 1990s onwards, Kitaj moved towards broken tones, open forms, dabs of clashing colour, hectic brushwork. This accelerated after 1997. While these pictures are occasionally memorable, they are often jarring, slapdash and plain ugly in the way his earlier paintings never had been. Livingstone is rather charitable abut Kitaj’s late American period, though understandably so as he is a long-time supporter and personal acquaintance of the artist.

This much expanded and revised edition of a classic monograph provides the best introduction to, and broadest survey of, Kitaj’s work. This edition includes the final works made before the artist’s death. Livingstone’s approachable 51-page introduction to the life and ideas of Kitaj in the context of his art is based on interviews plus many quotes from the painter’s letters. This is followed by an extensive colour-plate section with numerous large, crisp, illustrations; notes; Kitaj’s commentaries; a bibliography and a ‘complete catalogue of works’. This lists (without illustration) over 1,000 drawings, pastels and paintings. While it is useful to have major pieces listed in this fashion, what about sketches, prints, sketchbooks and lost or destroyed works? Presenting this on the cover as ‘a complete listing of all his works’ seems misleading.

Perhaps this new edition will act as an occasion to mark a reassessment of this often brilliant draughtsman and sometimes masterful painter.