Blasting off with the Vorticists 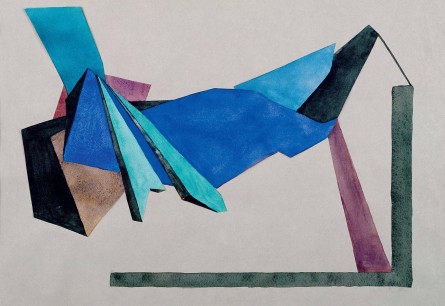 Blast, the Vorticist journal, boldly claimed in 1914 that ‘London is NOT a provincial town’ and this exhibition, previously shown in Italy and America, aims to demonstrate that the London-based movement was not provincial amongst the European avant-gardes.  Rather than placing Vorticism in this wider context, however, this exhibition focuses on the movement within pre- First World War and wartime London in order to take a closer look at this loose but fervent avant-garde group.

The stark imagery and potent message of the Vorticists is made immediately apparent by the towering figure of Jacob Epstein’s Rock Drill as soon as you enter the exhibition.  Although Epstein was not a signed up member of the Vorticists, he was involved in their circle and his strong sculptural aesthetic was congruous with theirs.  The white mechanized skeletal figure, stood atop a black rock drill, bears down upon the visitor with an intensity sustained throughout the exhibition. The rooms of the exhibition chart the public outings, as it were, of Vorticism from the Rebel Art Centre, Blast I, the Doré Galleries exhibition, Blast II, and finally to the Camera Club and Penguin Gallery exhibitions. This allows a story to be charted even though the majority of the works were produced in the eventful years of 1913–15.

The story begins with the Rebel Art Centre, set up by Wyndham Lewis with funds from Kate Lechmere (1887–1976), a painter who was also Lewis’s lover, in opposition to Roger Fry’s Omega workshops; the archive material on display gives an insight into how the Vorticists-to-be’s feuds played out with Fry and with F.T. Marinetti, the leader of the Italian Futurist artists.  The early works in this room include Lewis’s compelling Timon of Athens illustrations, David Bomberg’s geometric yet figurative scenes and, dominating the room, Henri Gaudier-Brzeska’s Hieratic Head of Ezra Pound. This large marble sculpture on one side depicts the Vorticist poet Pound in the style of an Easter Island head, as seen by Gaudier-Brzeska at the British Museum, while the reverse continues the Rock Drill’s phallic power, as it resembles a penis.  The graphic nature of Vorticist sculpture continues in the next room, where the focus is on Epstein, particularly his drawings and sculptures of pregnant women and bas-reliefs of birth.  The first edition of Blast, with its bold manifestos that ‘blast’ and ‘bless’ various aspects of British and European culture,is also central to this room, and facsimile copies are available for perusal.

After launching themselves onto the art scene ideologically with Blast, the first Vorticist exhibition was at the Doré Galleries in 1915; sadly, only two of Lewis’s oil on canvas works from this exhibition survive.  The curator for Tate, Chris Stephens, hopes that as the first Vorticism show in the age of the Internet some more will be uncovered. The star of the Doré Galleries show, and arguably this Tate Britain show too, is Gaudier-Brzeska, whose stone sculptures and hand-held cut bronzes, compellingly weave together primitive organic forms and the machine aesthetic. Gaudier-Brzeska had died before this exhibition opened, and his letters, postcards and Vorticist manifestos from the trenches are strikingly honest.

These are found in the next room, which focuses on Blast II The War Issue, including concurrent work such as Nevinson’s images of marching soldiers, and the cut down version of the Rock Drill, which focuses the eye onto the embryo at the heart of its mechanized torso. With these works we find Dorothy Shakespear’s bright, fresh and largely unknown collages. The exhibition culminates in two parts, with the Vortography of Alvin Coburn, which using three mirrors attached to the lens creates abstract images similar to the Vorticist aesthetic, and then the Penguin Club exhibition in New York of 1917, which was a mini-retrospective of Lewis and included the work of Wadsworth, Etchells and three 1915 graphite and gouache works by Helen Saunders.

While throughout the exhibition, the diversity between the artists involved in the movement is held in tension with what is clearly becoming an increasingly coherent aesthetic of Vorticism, the bold geometric abstraction always belies figuration.  There is, however, an impressive diversity to this exhibition, in both the work produced and the artists involved.  The female artists involved are well represented in the exhibition, as they were in the movement.   Although the movement was firmly established in London, the greatest vortex of all, the presence of the American Pound and French Gaudier-Brzeska, as well as the international connections made, bred an internationalism within the group.

This exhibition also brings an international element into what is often very much a British concern, as the curators of the touring exhibition, Mark Antliff and Vivien Greene, are American and half-American and half-Italian respectively and the exhibition was installed in America and Italy prior to its arrival at Tate Britain. In this installation, the largeness of the space, as opposed to the more domestic space of Venice’s Peggy Guggenheim Museum, is less suited to the relatively small-scale works. Grouping smaller works and allowing the sculptures space is effective as a remedy.  The curators have used colour well to tone the rooms, especially the use of the hue of Blast’s unforgettable fuchsia cover behind the Rock Drill.

This exhibition is historical and clearly research-led, showing works not seen for considerable periods of time. It constructs a coherent narrative of Vorticism and supports the impactful works with sketches and archival material.  The accompanying catalogue delves further into the subject, with leading scholars expanding upon research areas surrounding the development of Vorticism, and its American connections, which has long been noted as an area requiring further research.

Vorticism and to a lesser extent this exhibition have received criticism from many in the British press, despite having been well-received in the United States and Italy.  Admittedly, it is not on the scale of the Hayward Gallery’s epic 1974 Vorticism and its Allies, but this exhibition is more focused.Previously the British lack of appreciation of our own foray into the avant-garde was assumed to be an embarrassment about Vorticism’s aesthetic weakness compared with Cubism, Expressionism and others. This self-deprecation appears, however, to have mutated into something more malignant over the years. It is as if critics trace back everything they despise in contemporary British art to this source, or are inhibited by the fear of writing positively about artists later associated with right-wing politics.  The value of the movement is not, however, lost on many curators and art historians, and it is ultimately the public’s choice to decide whether they connect with the Vorticist ‘manifesto for a modern world’ or whether the movement’s lack of coherence and lateness to the European avant-garde party affect their appreciation of what is, in many cases, undeniably stimulating work.

Buy The Vorticists from AMAZON

The Vorticists: Manifesto for a Modern World
is at Tate Britain, Level 2 galleries, until 4 September 2011