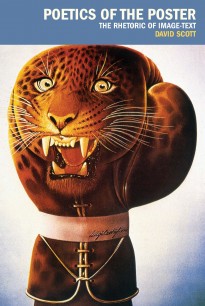 Poetics of the Poster: The Rhetoric of Image-Text

What hits you first about David Scott’s book Poetics of the Poster: The Rhetoric of Image-Text is its fabulous cover: a boxing glove transformed into the head of a roaring leopard. It is a great example of how the modern poster has been ‘able to evolve distinctive persuasive strategies to transform modern advertising’, in the author’s words. Scott links poster design to contemporary developments in the visual arts.

Scott uses the techniques of semiotics, ‘the study of signs’, derived from the work of the American philosopher Charles Sanders Peirce (1839–1914). Skilfully reducing a vast subject down to a readable five chapters, the author states his aim is to focus on aspects of ‘the construction of text/visual metaphor within the poster’. This step into graphic design history is supported by a rich backdrop of 120 full-colour poster images. Of particular interest is the series of Futurism and Art Deco graphic designs:

'Ultimately of course, as in a work of art (painting or poem) the effective poster elicits two tempos of reading. The first is essentially functional: it promotes the rapid perusal of the message so that the latter will have an immediate impact on the viewer/client... The second tempo is fundamentally aesthetic: it promotes the indefinite re-reading of the message...'

The subtle creation of metaphor through the ‘superimposition of one image on another’ is shown in an introductory example: a poster worded ‘See Britain by Train’, which illustrates a map of Great Britain on which is superimposed a section of a train carriage, the whole map speeding over a train track. It was created in 1952 by Britain’s most influential graphic designer, Abram Games (1914–96), who was also responsible for many morale-boosting wartime posters and those promoting the Festival of Britain in 1951. Scott also discusses Games’ groundbreaking travel poster designs for BOAC.

So what about that striking front-cover illustration?  Scott gives a brief history of the boxing poster, with examples dating from Grand Combat de Boxe, 1907, by Fernand Garric, through to Meuret/Pemberton, 1991 created by Claude Kuhn. A visual metaphor is created by ‘the juxtaposition of two formally analogous but semantically disparate objects...’. In the commercial world the graphic designer needs to direct the viewer toward the product. Metonymy – ‘the expression of the whole by a part...’ is recognised most effectively in ‘the pointing  finger  or  hand’  (Scott’s italics). The gloved hand or fist within the boxing glove is a visual sign of the sport’s motivation. Classic boxing posters are analysed, including  Backus/Sami,  1974 (the front-cover image) by the designer Luigi Castiglione. Probing deeply into Castiglione’s designs for boxing posters, Scott finds layer upon layer of meaning. At the simplest level the raised boxing glove – a sign of aggression – on which is superimposed the face of a leopard, is a visual reference to the national identity of the boxers, which Scott refers to as ‘panther country’.

In conclusion, Scott takes a look at ‘Image without Text’ posters, a popular and successful form of advertising for global brand labels. Throughout the book, he uses a stimulating group of examples, from airline logos to Swiss tourist posters, that effectively illustrate his argument that the ‘poetics’ of posters form ‘a theoretical framework elucidating a system of structures or conventions governing the expressive potential of the language’. Overall, the book is a compelling analysis of the subject supported by a superb choice of poster illustrations.

BUY Poetics of the Poster from AMAZON