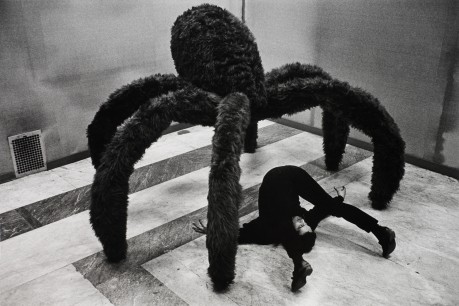 Chay Allen visits a photographic exhibition at the Estorick Collection

The Estorick Collection, set in Islington’s leafy Canonbury Square, has been described by Nicholas Serota, the Director of Tate, as ‘one of the finest collections of early twentieth-century Italian art anywhere in the world’. It serves as a frontispiece, if one were needed, for great masters such as Umberto Boccioni, Giorgio de Chirico and Marino Marini. The Estorick’s current exhibition ‘United Artists of Italy’ comprises photographic portraits of iconic Italian artists of the 20th century, celebrating one of Italy’s greatest exports and coinciding with the 150th anniversary of its unification.

Among the portraits included are those of Lucio Fontana, Sol LeWitt, de Chirico (see lightbox), and Alberto Giacometti. An entire exhibition dedicated to photographs of canonical artists is a curious idea and, after pacing around the first of the two rooms, I was unsure as to the point of it. One’s attention is divided between the artist as subject of the work and the photographic artist. In the first room, particularly, a series of documentary monochrome photos is presented in which the voice of the photographer is lost to the overpowering interest of witnessing modernist demigods at work. The attempt to represent two artists effectively in one work falls flat, creating an incomplete experience lacking in focus. Additionally, there is little continuity between the works displayed in the first room. One feels as though the documentary photos, generally used to provide a context for the display of artists’ work, have no such meaning here; what emerges is a fairly straightforward display of national pride, albeit an understandable one.

It is in the second room of the exhibition that a much-needed extra dimension is introduced within a few of the works displayed. These include Ugo Mulas’ photos of Lucio Fontana, who made slashes in the surfaces of his painted canvases in the 1950s and ’60s, when a number of artists were experimenting with the idea of destruction in art. Here Fontana’s contrasting pinstripe trousers and floral shirt, along with close ups of his slashing of canvases, reveal characteristics of both his work and character. Skilfully composed and shot, these portraits give the viewer more than just a presentation of the figure of the artist and are refreshing within the context of the wider exhibition.

Aside from the conceptual engagement that the photographs in the second room introduce, a welcome addition is that of colour. Gabriele Basilico’s portrait of Alberto Burri (1991) stands out as the most extraordinary piece for this factor and the qualities that emerge from its flat relief. Composed of a large dark grey hangar against a light blue sky infused with wispy clouds, and above an off-white sandy path occupying a sliver at the bottom of the composition, the figure of the artist is almost lost, dwarfed by the vast door in which he stands. It has the initial appearance of a collage or screen print: the collapsed perspective of the hangar makes it appear as if made of cardboard, the sky as if painted, and the ground as if made of sandpaper.

Furthermore, the piece is the only photograph within the exhibition without a border. This may seem a minor detail, but it throws the viewer whose eye has grown accustomed to the inch or so of white bordering that surrounds the rest of the 79 portraits. The lack of any border adds to the deception of the piece: recessed within a thick black wooden frame, it enhances the illusion that physical materials are used to create the surface. Basilico’s piece provides refuge for those who demand more from the photographic artworks presented. It is significant as a work in itself, clearly alluding to the agency of the artist photographer alongside the artist as subject. If Minini had included works of this calibre throughout, it would have been a much richer exhibition for it. If the success of the exhibition is to be judged in the round, however, it appears as a reflection of our celebrity-obsessed age. The interest shown in the figures of the artists presented is predominantly two-dimensional and overtly sycophantic.

The catalogue accompanying the exhibition is rich with images of both the photographs on display and those not selected. Indeed, the catalogue is more comprehensive in its display of material than the temporary exhibition space in the Estorick could allow. Happily, most of the reproduced images bear a very close resemblance to their originals. One or two are noticeably poorer, Nina Migliori’s Zoran Music (c. 1970) being one such example. Printed in Italian and French, the catalogue includes essays by Stefano Boeri, Hans Ulrich Obrist, Pier Luigi Tazzi and the curator himself, Massimo Minini, and provides a stimulating background to the show.

United Artists of Italy is at the Estorick Collection of Modern Italian Art, London, until 4 September 2011. The catalogue is edited by Massimo Minini.