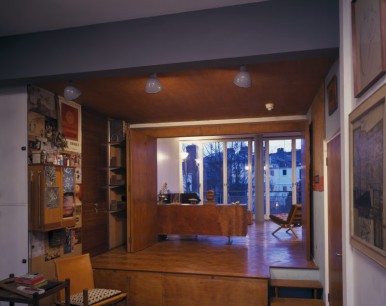 Despite its austere façade, Ernö Goldfinger’s modernist family home on Willow Road is imbued with warmth, creativity and light on the inside, as Jenny Kingsley discovers

Number Two Willow Road is a National Trust house in London designed by the modernist architect Ernö Goldfinger (1902–87), who lived in it with his family. Its facade is not beautiful nor charming nor awesome. If the stroke of a magic wand could transform it into a person, self-effacing or austere would describe their personality. When you arrive at where it is meant to be, you might think that you have the wrong address. Has someone pointed the signs in the wrong direction?

Indeed, in the 1930s, when plans for the house were first proposed, the owners of its Georgian neighbours, including a future Conservative Home Secretary, Henry Brooke, were apoplectic. How ill fitting this modern, supposedly ‘box like’, house would be. The outrage probably inspired novelist Ian Fleming, a local opponent, to name James Bond’s villainous adversary Auric Goldfinger.

But regardless of appearances, Willow Road merits appreciation, indeed respect, for its symmetry, simplicity and proportions, and what it represents in the context of modern architectural developments.

Ernö Goldfinger was born in Budapest in 1902 and educated there. His father was a lawyer, landowner and industrialist. In 1919, when the country came under communist control, the family left Hungary.  In 1920, the very tall and rather handsome Ernö went to Paris to study French, and later architecture, at the prestigious École des Beaux-Arts. In Paris Goldfinger encountered writers, architects and artists who were questioning the relevance of established modes of expression and were looking for new forms of creativity. One mentor was the modernist architect Le Corbusier.

Goldfinger’s friendships encouraged him to explore fresh design, and to appreciate studying under two men whose interests had a profound influence on his work and on modern architecture: Léon Jaussely, a pioneer in the field of town planning, and Auguste Perret, a pioneer in the use of unadorned reinforced concrete. Goldfinger joined the radical and influential Congrès International d’Architecture Moderne (CIAM), which advocated high-rise social housing.

Architects searching for new ways forward viewed ornamentation as firmly established in the past; some associated it with aristocracy and social inequality. Plain, rational, ‘pure’ design became the vanguard of an innovative future embracing mechanization. Industrial advances in construction with steel enabled architects to design taller buildings. Reinforced concrete allowed for broad-scale interiors. Curtain walls could be glass and sheets of white concrete. Office and living space could be more practical and functional.

After studying, Goldfinger designed shops, apartments and furniture for a privileged clientele, though he was by his own admission ‘left wing’. In 1927, he designed a beauty salon for Helena Rubinstein in London. In 1933, he married Ursula Blackwell, an artist whom he had met in Paris. She was a member of the family who owned the Crosse and Blackwell food company. The couple moved permanently to north London.

The Goldfingers may have been attracted to the area because it was also home to other writers, artists and architects; some were refugees from Nazi Germany. The couple’s émigré friends included the well-known modernist architects Walter Gropius, Marcel Breuer and Berthold Lubetkin, who designed the apartment block, Highpoint, where the Goldfingers first lived when they arrived in London. The Goldfingers befriended British modernists such as Wells Coates and Maxwell Fry. Artists living nearby included Ben Nicholson, Barbara Hepworth and Piet Mondrian. Indeed, there are several icons of modernist architecture in north London (Hampstead): the Isokon building (where Agatha Christie once lived), the Sun House, and the Royal Free Hospital.

During the pre-war years in London, Goldfinger designed toys, a toy shop in Wimpole Street and a single storey house in Broxted, Essex for the artist Humphrey Waterfield.  He also collaborated on the popular Penguin pocket explanatory edition of the County of London Plan 1941.

After the war, Goldfinger designed schools, offices and small and large scale public housing, including the headquarters for both the Daily Worker newspaper and the Communist Party. In 1959, he embarked upon his most ambitious scheme. For the Ministry of Health he designed what was at the time the largest office development in England, Alexander Fleming House, situated at London’s Elephant and Castle. He also designed housing, a shopping centre, offices and leisure facilities, including a cinema, on adjoining sites.

Goldfinger is well known for his social housing commissions for Balfron Tower in Tower Hamlets, London (initiated in 1963) and a ‘twin’, Trellick Tower (initiated in 1969) in West London. The buildings were quite forbidding, fortress-like – in kindness one could say monumental – constructed with sheer concrete and detached circulation towers with slit-like apertures, joined by walkways to the main body of the building. Many tenants appreciated the fact that Ursula and Ernö lived in a flat in Balfron Tower for two months, to understand how tenants felt about their new homes. The Goldfingers hosted a champagne party to meet the neighbours. Perhaps as a result of their reception, Trellick Tower included a club for the elderly, nursery school, shopping arcade, doctor’s surgery and hobby rooms.

But, alas, the estates suffered from poor maintenance and management and anti- social behaviour upon the walkways. Tenants, especially the elderly and those living alone, could feel isolated and alienated living so high, preferring to live nearer the ground, closer to the rhythm of every day life.  Lifts often broke down. These high-rise buildings clouded Goldfinger’s reputation. The concrete facades were perceived as monotonous and brutal, rather than as practical responses to the post-war British housing shortage.

Number Two Willow Road is one of a row of three houses that were conceived by Goldfinger. He intended the largest, the middle one, to be for his family. The houses were built on a site once occupied by four derelict cottages. They look over Hampstead Heath.

Many of Willow Road’s features are characteristic of modernist offices and homes. The frame is concrete, and the roof is flat, enabling the spiral staircase and bathrooms to be lit from above. Continuous and horizontal windows allow for a great degree of daylight, and help to bring a sense of open air, nature and the Heath’s green vistas indoors.

The stairs, floors and inner walls are concrete. Concrete columns and thin steel stanchions – posts – bear the weight of the floors. There is no coving or skirting board in the house. A hand operated dumbwaiter linked all the floors.

There is a garage on the ground floor, which is now a cinema. The entrance hall, with white and slate blue walls, is low ceilinged and lit by obscured glass on either side of the red front door. The glass is separated into compartments so objects can be displayed.  Originally there were two maids’ bedrooms, a kitchen and a spiral staircase leading to a garden room and a laundry (this area is now a caretaker’s flat.)

The range of wall colours throughout the house, architectural historian Alan Powers notes, are similar to those used by Cubist painters such as Georges Braque and Juan Gris. On the walls and window ledges, one sees African art carvings and works from the Goldfingers’ modern art collection – presents or purchases from friends and acquaintances such as Bridget Riley, Henry Moore, Jean Arp, Roland Penrose and the photographers Lee Miller and Man Ray. Goldfinger designed much of the furniture.

On the first floor there is a study, dining room, sitting room and studio (for Ursula’s painting). Partitions and folding doors allow for the three latter rooms to be opened up, creating one enormous, bright, floor space. The dining chairs are made from chromed steel tubing; the seats and backs are plywood. The dining table is plywood covered with linoleum. A part of the living space is raised.

There is oak parquet flooring in the  sitting room and a dark steel-framed fireplace with a green marble hearthstone. Waxed oak plywood covers the walls.

On the top floor, there is a nursery. Partitions enable the area to be separated into two children’s bedrooms and a nurse’s bedroom. The children’s beds can be fitted into recesses between the party walls. The nurse’s bed folds away by day into a cupboard. There are a range of lockers over the doors. The main bedroom looks quite clinical all in white! The bed, without headboard, is low. Apparently Goldfinger believed, according to Powers, that the ‘higher civilisations, such as the Japanese, slept closer to the ground’. The spare room has cupboards concealing a narrow tip up bed, washbasin and storage. There are also two bathrooms and a separate lavatory. Bleached white dominates.

One distinguishing factor of Goldfinger’s portfolio was that he never embraced what is considered the archetypal external ‘white box’ look, what he disdained as the ‘kasbah’ style. He was drawn to the use of brick, metal, concrete and wood, structural simplicity and balance. Perhaps because of the unpopularity of his high-rise housing and his ‘outspoken manner’, Goldfinger was never regarded as a frontrunner in the modernist movement. He was given, as Powers remarks, to ‘great rages and great affection’, and never dull in company. Maybe this is why, once inside Willow Road, one discovers hidden beauty and rays of warmth.

Modernist architecture
In the early 20th century modernist architecture (modernism) was propelled by a rejection of historic architectural styles and their excessive internal and external detail and ornament such as mouldings and pinnacles. Why? Modernists embraced the future: the mechanization and industrialization of a new age enabled the use of steel, concrete and large sheets of glass to build sky high and create a powerful sense of light and space. Many modernists saw their vision as improving social conditions.
Modernist architecture is most often recognizable in flat roofs, white rendering and/or brick and glass facing, geometric shapes, windows in horizontal rows, projecting elements appearing to defy gravity, open-plan interiors, simple furnishing and fittings – a clean, functional look. The purpose of a building should dictate its shape and purpose – ‘form follows function’, said leading modernist architect Mies van der Rohe. Members of the Bauhaus, an influential German academy of design, were leading champions.
Modernist styles included the ‘International’ associated with Le Corbusier and Mies;  ‘Organic’, where the structure of a building reflects the nature of its environment, e.g. Frank Lloyd Wright’s Falling Water; Constructivism; and Brutalism.
Some critics consider modernist architecture and its development as sterile and harsh, preferring more traditional facades and interiors, but it has become much more acceptable in Britain since the millennium, 100 years after its arrival in mainland Europe.