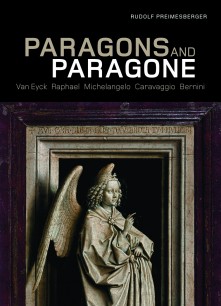 This book reads like a journal assembled out of greatest hits articles.  Not only is the distinguished art historian, professor emeritus of the Freie Universität, Berlin, one of the most renowned scholars of Renaissance and Baroque art in Europe.  Additionally, his subjects form a who’s who of artistic greatness in a series of focused articles, chiefly addressing individual works.  Let those who deny there is a canon of art historical ‘key monuments’ abandon hope if they enter here.

But this is not a primer for beginners.  In the article on Caravaggio’s painting the Entombment (1603–4, Vatican Museums), for example, foreign terms crop up in every paragraph. I noted phrases from Greek, Latin, French, and Italian (and of course the original language of the article was German), all simply tossed into the mix as familiar terms by this scholars’ scholar.  Free interchange – between Renaissance theory and contemporary practice, between word and image, between painting and sculpture – marks this discussion and all the essays in the volume.

Yet Rudolf Preimesberger is always working from the object under investigation, attempting to explicate the ambitions of these leading Renaissance artists and the choices they made in executing their works. Sometimes they competed self-consciously with the legendary artists reported from classical antiquity as much as with the emerging new canon of Renaissance Italy. For Caravaggio, Michelangelo’s Vatican Pietá, a sculpture created a century earlier, served as an unavoidable model of the unmarked, muscular body of Christ, viewed obliquely, but also contrasted in his painting with a hunchbacked figure of Biblical proto-sculptor Nicodemus (with features like those of Michelangelo himself, whose Christian name Caravaggio shared).  Here, then, the leitmotif of these articles is sounded, the paragone: spirited competition between painters and sculptors, between later artists and their models.

To scholars of the Renaissance, these essays already hold classic status for their erudition, rich layers of interpretation, and creative engagement with the objects.  In particular, the Van Eyck essay (with its perceptive consideration of optical effects, especially reflections, and its links to late medieval visual theorists) will be welcomed by scholars of Northern Europe – further evidence of the versatility and scholarly contribution of Preimesberger to younger generations.   The Getty Research Institute deserves thanks for making these important publications more accessible.  Now the Berlin emeritus professor can reach a wider, English-speaking audience, to teach anew all who might not have found access to his work earlier.

The paragone debate
In Renaissance times, and even later, there was considerable debate over whether painting or sculpture was the greatest art. Which allowed the greatest fidelity to nature? Like a real figure, a sculpture has three dimensions and  can be walked around; even a relief has contours. On the other hand, paintings can set figures in convincing settings and have the colour of life. Artists competed to show that their work was the best. They were partly inspired by stories from the classical past. Legend has it that the Greek painter Zeuxis painted grapes so lifelike that birds mistook them for the real thing; Pygmalion created a statue so realistic that he fell in love with it.
•••••••••••••••••••••
Grisaille painting imitates the look of relief sculpture; such eye-fooling (trompe-l’oeil) effects can be very convincing.