The other Constable country 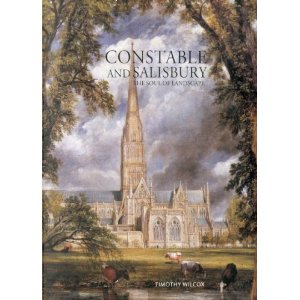 Constable and Salisbury: The Soul of Landscape

Constable’s relationship to the land and his translation of it extends to Salisbury, as expertly documented by Timothy Wilcox, whose exhibition and catalogue celebrate the bicentenary of Constable’s first visit to this region. The exhibition can be seen at the Salisbury & South Wiltshire Museum until 25September.

This was an area that Constable painted and drew more than any other part of England beyond the Suffolk/Essex areas with which he is most associated. He created more than 300 watercolours and paintings of this region. His connection to Salisbury was rooted in his friendship with the Fisher families (Bishop John Fisher and Reverend John Fisher) and persisted over seven visits that included villages in the area and historic sites such as Stonehenge and Old Sarum.

‘Constable and Salisbury: The Soul of Landscape’ – both the exhibition at and the substantial catalogue accompanying it – captures the artist’s fascination with a region that became a second marker of his personal geography. Constable turned to Salisbury -- its cathedral, the cathedral close, and its monuments  – as a means of rooting his mature identity in moral, emotional, and aesthetic terms. In essence, Salisbury offered a window onto the landscape and Constable’s association with it. Indeed, the cathedral itself may be seen from a window in the museum – a rare chance to see both subject and paintings together. Seven chapters offer equal footing to masterpieces, such as Salisbury Cathedral from the Meadows (1831), and minor works, as they articulate his visits to Salisbury from 1811 through 1829.

Thecatalogue expands the content of the exhibition beyond the 40 works by Constable and three engravings by David Lucas after Constable on view there. Thirty-two resources are offered in the bibliography, of which seventeen are Constable-specific.  The index addresses figures, works, and topics of relevance (such as ‘rotten boroughs’, where one or a very few voters controlled an entire parliamentary constituency, in reference to Old Sarum). The book is hampered only by a minor error on the chronology (p. 9 listing Constable’s death as 30 April 1837 instead of 31 March of that year).  The publication will interest both the general reader and the expert, owing to the depth of focused content.

BUY Constable and Salisbury FROM AMAZON