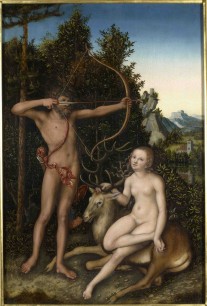 The Northern Renaissance. Dürer to Holbein.

To paraphrase Mel Brooks, ‘It’s good to be the Queen’.  Or at least to inherit the Royal Collections of paintings and drawings.  This exhibition, handsomely installed in the comfortable Queen’s Gallery at Holyroodhouse, Edinburgh, is a current showing of the Crown’s early Northern paintings and drawings, chiefly 16th century. It remains on public view until 15 January 2012, accompanied by a handsomely illustrated and authoritative catalogue.   It will come to the Queen’s Gallery, Buckingham Palace in October 2012.

Yet this is not the first recent exhibition of Northern art from the Royal Collections; a more focused exhibition, ‘Bruegel to Rubens: Masters of Flemish Painting,’ was staged at Buckingham Palace, London (17 October 2008–26 April 2009, with a more popular catalogue written by Desmond Shaw-Taylor and Jennifer Scott).  Some overlap, chiefly in portraiture, unites these two exhibitions, but that installation chiefly featured Bruegel’s Massacre of the Innocents and a splendid cluster of Rubens works.  For the most part the material in Edinburgh is fresh and its catalogue entries more scholarly, with useful references for further study.  This book is not popular art history, though it is clear and informative.

The regions represented here also extend beyond the Flemish traditions of the prior exhibition.  While the first section is devoted to the Netherlands, and a final segment stems from France, the core of the exhibition truly does focus on the named artists of the subtitle, the German-speakers, Albrecht Dürer of Nuremberg and Hans Holbein the Younger, from Basel but also court painter to Henry VIII.  Indeed, while not restricted to the world of the court proper, many of the images in this exhibition derive from royal portraits, made by painters from all these lands for the Tudors and their contemporaries.  A useful map and a genealogy of those rulers in Northern Europe thus provide an appropriate opening to the volume.

Portraits do highlight this exhibition, whether for anonymous sitters (Hans Memling, no. 1), celebrated intellectuals (Erasmus, by Massys, no. 6, or by Pencz, no. 55; Holbein’s Johannes Froben, no. 66), German merchants (Dürer’s Burkhard of Speyer, no. 23; Holbein’s Derich Born, no. 72, who graces the cover), or royals.  Among the glories of these last images, several likenesses stand out: Gossaert’s trio of Danish royal children (no. 9) or François Clouet’s young Duke of Alençon (no. 95), plus Joos van Cleve’s rarely seen Henry VIII (no. 18), his Eleonore of Austria, Queen of France (no. 17), and Jean Perréal’s Louis XII of France (no. 91).

Drawings like these were ideal objects for the Holyrood galleries, and a host of other precious sheets, chiefly by Dürer (also represented by fine impressions of his prints) and his German contemporaries.  Additionally, a pageant costume from Leonardo’s stay in France (no. 100) stood amidst Fontainebleau designs by both Italians and French artists as well as the lone sculpture, a bronze Satyr by Cellini from Fontainebleau (originally linked with Cellini’s Nymph of Fontainebleau).  Among German painters, Lucas Cranach was well represented (nos. 57–9) by a pair of mythologies, while Holbein’s religious art is exemplified by hisNoli Me Tangere (no. 68).  From Flanders Gossaert’s massive Adam and Eve (no. 8) and Heemskerck’s Jonah under the Gourd (no. 14) dominate.

For a royal collection to feature royal portraits and other luxury objects, such as manuscripts or books (nos. 19, 54, 86–90, 109–10), should not surprise; nonetheless, the wide range of subjects and roster of significant artists on the walls remains impressive.  In addition, to have a lasting scholarly study of these important images provides a welcome bonus, which will long serve as a touchstone for these artworks but also as a souvenir of a sovereign’s generous sharing of her patrimony with her subjects.

BUY The Northern Renaissance from AMAZON