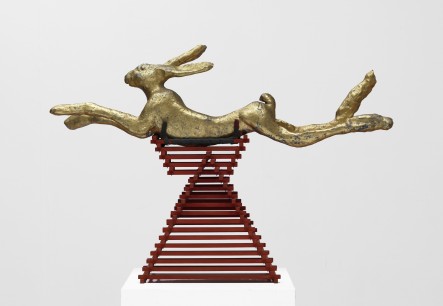 Barry Flanagan, the sculptor best known for his gargantuan bronze statues of hares, is a peculiar figure in the history of modern British art. Introduced to the international art world through his representation of Britain at the Venice Biennale in 1982, his earlier work was overshadowed by the popular bronze hares he produced from 1980 until his death in 2009. Tate Britain’s current exhibition, ‘Barry Flanagan: Early Works 1965–1982’, addresses the lack of awareness of this early period and attempts to emphasize his importance to the development of post-Minimalist sculpture during these years, in which traditional notions of form and material were subverted, with an emphasis placed on process.

Organized over six rooms, the exhibition narrates his journey from a student at St Martin’s School of Art to his emergence as an established figure in the art world. His interest in spatial intervention is a running theme, from the pile of sand, ringn ’66 (1966), and his tepee-shaped branch sculpture Untitled (1970), to Oh! Mind How You Cross (1977–8), featuring a vast cable rope doubled up and arranged in a figure of eight across the space of the gallery. Indeed, his mature bronzes follow the same concerns. In the final room, Opera Dog (1981) almost trips up the viewer, whose attention is focused on Large Leaping Hare (1982), a six-foot bunny flying through the space of the gallery.

Flanagan’s persisting interest in spatial intervention is seen through his experimentation with differing materials. His interest in infringing the viewer’s space in his later bronzes is evident in his experiments with sand, hessian, rope, sticks, stone, and his conscious engagement with light as a sculptural tool. The use of these materials reflects the prevailing engagement with a so-called ‘junk aesthetic’ during the late 1960s and ’70s. Nonetheless, the exhibition’s claim that Flanagan was a pioneer of international sculpture is a bit strong considering he was replicating developments made by artists such as Robert Rauschenberg, Allan Kaprow, Red Grooms, Claes Oldenburg and Wolf Vostell in the 1950s and early 1960s in America and Europe.

The first four rooms are effective and informative; one feels a sense of continuity and cohesion of progression. The fifth space, however, is deeply flawed: purportedly preparatory studies hang on the walls, one presumes relating to the sculptures and pottery from the mid-1970s that they surround. In fact, the ‘studies’ from the mid-1960s have no relevance to the sculptures on display and, what is more, are deeply uninteresting pieces. Not only do these graphic works detract visually from the sculptural works, they completely mar the chronology that is so effective throughout the show up until this point. It is a cowardly move by curators not bold enough to give the pieces space to breathe.

The show ends, thankfully, with his crowd-pleasing bronzes, giving some relief in their familiarity. Alongside two leaping hares, the display includes Double Bell (1980), and studies for Cricketer (1981) among other pieces. While Flanagan’s early work is interesting and helps the viewer to understand his later works in more depth, it is plainly evident why his mature output is recognized to be of greater interest than his earlier work.

The catalogue accompanying the exhibition features three essays, two by the curators and a foreword by Penelope Curtis, Director of Tate Britain. Beautifully presented, with full and double page colour plates of works in the exhibition, it gives a genuine insight into Flanagan’s practice and is a significant contribution to existing scholarship on him.

In her introduction Curtis argues that, by highlighting the importance of his early works, the show avoids reducing an appreciation of Flanagan’s output to two distinct periods. The catalogue certainly avoids this, though such care is not replicated in the show itself: the sixth room ensures that the two periods are opposed in the minds of the viewers as they leave the exhibition. Excluding them altogether would have ensured a clearer focus on the artist’s early output, and a greater feeling of cohesion with his later pieces, of which any visitor interested in seeing a show on his early work would be well aware. As it stands, the exhibition appears confused in its aims and timid in its presentation, sitting halfway between a major retrospective and a niche study. A show focusing on Flanagan’s experiments with junk aesthetic in the 1960s and ‘70s would have been far more satisfying, but what emerges is a small-scale show trying to achieve far too much with too little conviction.