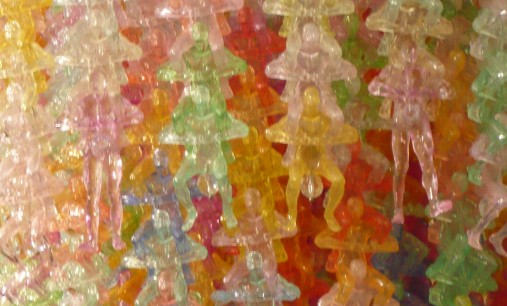 …and the prize for the most stylish port-a-loo goes to …Frieze Art Fair. Marx declared that under capitalism ‘all that is solid melts into air’ but at Regent’s Park, for a few days each October, where there was once only fresh air, capitalism solidifies at Frieze. Only the rather clunky loo doors and the odd glimpse of canvas if you look up remind you that you are actually in a tent, a big top where art performs being art.

It is vast. You would have to go every day to see it all properly, and one day is exhausting. It is described as a ‘contemporary’ art fair, although work from several decades ago is on display next to work made this year. It is also described as ‘international’, which is a fair description, given that many galleries from north and south America, Europe, Turkey and Japan were represented – the fair may be held in London but it is not dominated by London dealers.

So here, in no particular order, are a few things I glimpsed as I tried to cover the ground. Lehman Maupin New York’s stand was dominated by Do Ho Suh’s  Cause and Effect  (2007, Figs 1 & 2 ), a vast ‘chandelier’ (with no actual lights, as far as I could see) of acrylic figures, hanging in tiers from a steel hoop. Little pastel-coloured ‘men’ sit each on another’s shoulders. To sit thus is normally to be supported, but here it is the upper figure holding up the lower one, and in turn being held up by the figure supposedly sitting on his own shoulders, in a chain of dependency.  Nearby, Tony Oursler’s  Double  (1994, Fig. 3) is a disturbing piece. A rag doll is propped up in a corner of an open suitcase, a video of a man’s face, talking, playing on the smooth white ‘egg’ of its head. One’s focus changes involuntarily, one moment clearly seeing the ‘real’ face projected on the doll but at the next seeing the doll’s face as somehow itself real, a deformed but animate visage.

Art is often created to disturb – there is no need for it to be the relaxing, spiritual ‘good armchair’ that Matisse advocated. I found the next exhibit disturbing in a way that Do Ho Suh’s and Tony Oursler’s works are not and that may well not have been intended by the artist. A full sized, apparently working speedboat was being shown by yacht makers Ferretti Group at the Riva/CRN Ferretti Group Forli stand (Figs 4 and 5). It was too big to see properly from the ground, but a handy set of stairs led up to a viewing platform allowing one to see the luxurious interior. A great way to travel, but is it art?

A young woman staffing the stand told me that for artist Christian Jankowski this boat and another much larger craft (respectively called ‘Christian’ and ‘Jankowski), are ‘found objects’ in the tradition of Marcel Duchamp’s urinal, exhibited under the title  Fountain  in 1917. She explained that boats normally start to depreciate as soon as they are sold, but this boat, signed by the artist, would be a work of art and therefore appreciate in value over time. Alongside the craft, a video entitled ‘The Finest Art on Water’ repeated much the same message. In it, CRN’s sales director explained that he is taking part in a performance: he can be a seller of boats or, with a step to one side, an art dealer, depending on whether the craft are seen as boats or as art.

A press release tells us that ‘Jankowski aims to engage directly with the idea of sales and exchange and the value of luxury goods. The  Finest Art on Water  is not only a yacht but a work of art: an exclusive, ready-made art piece that implicates, involves and engages the spectator’.  The wording seems borrowed from many a contemporary art show, as if to ‘implicate, involve and engage’ us is automatically artistic. Rather, it suggests being absorbed into what Situationist theorist Guy Debord called ‘the society of the spectacle’ in which ‘real life’ is obscured by a series of entertaining illusions. The inevitable consequence of treating art as a commodity is that art works become subject to financial speculation (the makers do not address the possibility that depreciation might on occasion be greater for an ‘art boat’ than for an ordinary one). Duchamp’s urinal became ‘art’ by virtue of its translation from public convenience to art gallery – it became ‘art’ when it became useless. By Duchamp’s time art could no longer be defined purely as what the Academy or Salon decreed. Since the Impressionists, artists had insisted on the right to define art for themselves, and Duchamp’s  Fountain  took this to its logical conclusion: anything an artist exhibits in a gallery is art. But what when it is removed from the gallery?

Duchamp did not suggest that Fountain  would remain art if taken back whence it came. These boats may be signed by the artist, but unless they remain in a gallery they will not have been rendered useless for practical purposes, like  Fountain.  Alternatively, one might ponder the boundaries placed between ‘art’ and ‘design’ – can one become the other? The boats are certainly beautiful – and is a pleasure craft ‘useful’ or is its very use useless? Whoever buys these boats would be best advised to have a jolly nice time in them, not try to manipulate their value or display them in a gallery.

At Paul Kasmin Gallery, New York, Will Ryman’s  Rose  (2011, Fig. 6) is in fact four roses not one, which at  188.6x254x144.8 cms together look as if they have escaped from the Little Shop of Horrors after swallowing the building – and this is only one of an edition of eight... While this could only be a contemporary work, nearby, François- Xavier Lalanne’s  Genie de Bellerive (petit) sur Pylon (2007, Figs 7 & 8), a bronze sculpture of an owl atop an elegant ‘pylon’, looks as if it could have been made thousands of years ago, or last week.

London’s Annely Juda gallery showed Anthony Caro’s  Floor Piece Hè (1972, Fig. 9), which reminded me somewhat of Giacometti’s  Woman with Her Throat Cut  (1932). On the wall behind it, Alan Charlton’s 12-part  Grid Painting  (2011, Fig. 10) seems a return to the austerity of Minimalism but strangely compelling. Are all these panels the same shade of grey? Is it just the light that makes them seem to vary? Some seem to project further forwards than others, depending on where one stands, so I think that is just an optical illusion – Minimalism or Op art?

At the Pace Gallery stand, the powerful works on show were identified only by a label bearing the artist’s name. In a massive painting by Chuck Close, a man’s face is composed of a ‘mosaic’ of images of painted circles or ovals within squares (Fig. 11, right). From a few feet away the effect is of subtle modelling of the features, but closer approach causes the image to disintegrate. For sheer beauty, Tara Donovan’s metallic sculpture (Fig. 11, centre & Fig. 12, right) is hard to beat – a construction of silver metal ‘pom-poms’, each made of what look like curling folds of metal foil, which alas does not photograph well. Li Songsong’s painting of a horse (Fig. 12, left) is almost sculpture itself, apparently challenging the modernist dictum that flatness is the essence of painting. Here the paint appears inches thick, with elements of the horse’s skeleton gouged out so that we are confronted with a sort of 3-D X-ray.

Also shown by Pace were Raqib Shaw’s delicate and jewelled (literally) image of creatures from an Arabian Nights fantasy – or nightmare: a human figure with the head of a panther, a mermaid with fish tail and animal head, and everywhere glittering, writhing snakes (Fig. 13). Nearby a delicate Alexander Calder mobile spoke of balance and calm, though responding gently to every movement of the air. It hung in a little ‘sixties’ corner, with work by Agnes Martin, Robert Ryman and Willem de Kooning.

Dublin’s Kerlin Gallery showed a series of Callum Innes’ 2010 water colours ‘Untitled’ while his oil paintings Untitled No 64 and Untitled no 56 hung on the other two walls of the stand. In the middle of the stand, a rather beautiful set of small sculptures by Mark Garry caught the eye. Garry has bent old vinyl LPs into saddle shapes and upholstered them in bright fabrics and ribbons which trail down from the saddles, which are mounted on mahogany stands. Each retains the title of the original record:  William Faulkner – Faulkner Reads from His Works  (2011),  Classic Poems of Suspense and Horror Read by Marvin Millar  (2011) – and so on. Or at least, one supposes this is where the titles come from, as it is no longer possible to see the records themselves, rendered permanently both useless and beautiful (whereas Duchamp’s  Fountain  or Jankowski’s boats manage only to be one or the other) (Fig. 14).

I could not finish without mentioning Galerie Peter Kilchmann of Zurich.  Feeble  (2011) by Javier Tellez features what appears to be the goose that laid the golden egg – or in fact four of them. Three of these are apparently balanced one atop another while the goose (a stuffed specimen) looks on at her glittering but sterile output, like a metaphor for the world’s financial markets, piling up worthless treasure oblivious of its propensity to come crashing down (Fig. 15).

While conventional financial assets seem vulnerable and subject to alarming falls in value, art seems to hold its own. Dealers come to Frieze to sell, and buyers from all over the world come to invest. Despite ever-increasing numbers of artists and available art works, art retains the mystique of the rare creation, and this fuels its rise in value. Nonetheless, the works that were most sought-after in the past are not necessarily those that we value today. There is no guarantee that any particular work of contemporary art will still be valued at today’s price – or more – in ten years’ time. This does not seem to put anyone off, however and no doubt money has been made all round. But if the organizers are short of a few quid perhaps all those elegant port-a-loos could be sold off as 21st-century Fountains.