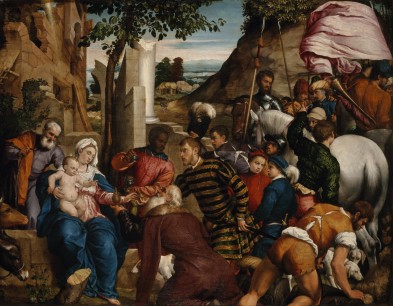 Titian and the Golden Age of Venetian Painting

Francis Egerton, 6th Earl of Bridgewater (1736–1803)  had been on the Grand Tour to Italy as a young man. On his return to England he threw himself into the development of the canal system designed to transport coal quickly and economically to the seaport of Liverpool.  By the end of the 18th century he was one of the richest men in England although it was noted that he talked little except on the subject of canals. Like many rich men of this or indeed of any age he decided to embark on buying art and these purchases formed the basis of his collection. A number of these paintings would be lent to the National Gallery of Scotland after the Second World War.

'The Bridgewater Collection and the National Gallery of Scotland' by Michael Clarke forms the topic for the first of the two essays in this book. In  Titian and the Golden Age of Venetian Painting, Edgar Peters Bowron and his colleaguesrepresent almost the whole spectrum of Venetian painting of the 16th century even though they highlight just 25 paintings and drawings from this era.  The distillation is impressive: most of the great masters are here and examples cover each type of work in which the Venetian artists excelled: religious paintings, the portrait, the female nude, and mythological themes.

These 25 works of art, all from the National Gallery of Scotland, were displayed in an exhibition of the same name shown this year in three American city art galleries: the High Museum of Art, Atlanta, the Minneapolis Institute of Arts and the Museum of Fine Arts, Houston.  The crowning glories of the exhibition were Titian's two celebrated masterpieces Diana and Actaeon and Diana and Callisto,which had never before been exhibited in America.

The second essay in the book 'Titian and Venetian Painting in a Time of Triumph and Tragedy' by Andrew Butterfield deals with the Venetian context of the works displayed.  After the Sack of Rome in 1527, republican Venice was the supreme capital of Renaissance painting.  It was the richest city in Europe and its mercantile, politically stable society created a dynamic art market and its lagoon location kept it apart from the politically war-torn and much-invaded mainland.

Venetian art of this period displayed an advanced use of oil paint, a freer approach to composition, a cultured understanding of classical and humanist subjects and an expressive depiction of emotion.  A Virgin and Child with Saints  by Lorenzo Lotto and Titian's Virgin and Child with Saints  provide  examples of the type of work popular for use in personal meditation. Their aim was to teach the viewer to become more Christ-like.  Bassano's Adoration of the Kings and  Tintoretto's Christ Carried to the Tomb  provide examples of the narrative religious painting that became increasingly popular during the 16th century.  Veronese's St Anthony Abbot and Antonio Petrobelli is a fragment of an altarpiece that, in its original state, would have been approximately 16 feet high.

Portraiture in the 16th century began increasingly to represent something of a person's temperament as well as physical appearance and this development is represented  here by Lotto, Palma Vecchio and Tintoretto.

Sixteenth-century Venice is renowned for the depiction of the female nude, reflecting the liberty of artists in Venice to depict romantic and sexual topics.  Whether this is owing to the demand for what could be called almost 'soft pornography' or to a more elevated contemplation of love poetry and philosophy is debatable. Titian's Anadyomene  and Paris Bordone's Venetian Women at Their Toilet   represent examples of this type, as do Titian's two Diana paintings, albeit linked with mythological subjects and dealing with such weighty themes as fate, cruelty and the fragility of human existence.

A richly illustrated catalogue section with in-depth accompanying notes, including details of the exhibition drawings by a variety of artists, rounds off the book.

Getting to grips with 16th-century Venetian painting can seem an overwhelming task.  By focusing on a narrowly targeted and yet paradoxically widely representative small group of carefully selected works this book makes the task much easier and the themes infinitely more manageable. It is beautifully presented and richly illustrated, full of absorbing detail within the overarching narrative.

BUY Titian and the Golden Age from AMAZON