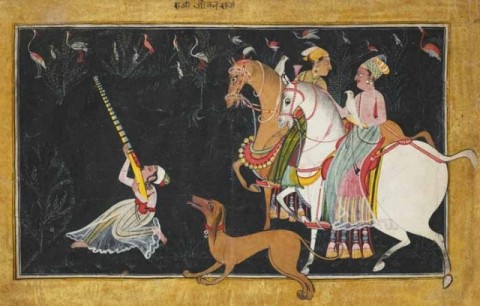 Imagine a latter-day Giorgio Vasari, writing from a vantage point of only a century after the full span of Italian art, starting two centuries before Giotto until after the Risorgimento and the establishment of modern Italy.  His sequence of named artists and descriptions of the works could be supplemented today with clear, colour reproductions, and the expertise of additional scholars could be enlisted to cover such a vast field.

Do we now have the equivalent for Indian art? Until now, Indian painting has been an elusive quarry, which could only be consulted in specialist monographs and catalogues.  But under the aegis of the curator at the Rietberg Museum in Zurich, Jorrit Britschgi, three of the leading specialists in Indian painting have collaborated with other major scholars to provide what will long remain the indispensible reference on painting in the subcontinent.

An introduction by the editors surveys the early pictorial imagery of largely Buddhist, Jain, and Hindu narratives.  But the book makes clear that the 16th century brought a new phase of pictorial innovation followed by the advent of the Mughal Empire, which sponsored celebrated court art that lasted until after the mid-17th century.  Regional styles and 'peripheries' dominated up to and beyond the British Raj, which brought new techniques and topics as well as art academies.

A typical entry holds a wealth of information.  A good example is John Seyller's entry on Manohar (active c. 1582-c. 1624), accompanied by 14 high quality, full-colour images, two of them full-page.  This follows a prior entry by Seyller on Manohar's father, Basawan (active ca. 1565–98).  A catalogue follows, itemizing first 'Important' inscribed works, noting locations (album and modern library or collection) and scholarly references; then come important attributed works that extend outward from the inscribed core.  Where historical sources document the artist, those are also included.  Then the pictorial analysis of style and achievements lays out the contribution of the given artist (Manohar includes self-portraits within his miniatures of the Akbar court).  Finally a bibliography points to specialized studies and further reading.

No encyclopedia could do a fuller job than this book, which now provides the subcontinent's version of the Grove Dictionary of Art. It will be critical for specialists but will probably hold less general interest, since as a reference tool it addresses individuals who have a personal commitment to this corpus of imagery for some reason.  It belongs in every research library or museum and is already the first book to consult on any named individual within its wide, eight-century span.

Though the book nowhere identifies them, the eminent authorities who contributed to it are leaders in their field.  Milo Beach is the dean of American scholars of Mughal and Rajput painting, author of numerous books and monographs as well as the former director of the Sackler Gallery.  Eberhard Fischer, former director of the Rietberg Museum, and B.N. Goswamy is the professor emeritus of art history at Punjab University, Punjab.  Together, Fisher and Goswamy wrote a seminal joint study on Pahari painting.  Also noteworthy among the other distinguished contributors is John Seyller, a specialist on early Mughal painting and professor at the University of Vermont.

As an example of the importance of this two-volume reference, a current exhibition, jointly organized by Britschgi and the Rietberg with John Guy and the Metropolitan Museum in New York, displays the fruits of these findings (crediting 30 scholars in its accompanying catalogue).  Titled, ‘Wonder of the Age’: Master Painters of India, 1100-1900, this pictorial survey deftly surveys 40 Indian masters with almost 200 items.  Its overview draws the basic contrast between Mughal artists, admixing Persian miniature conventions with meticulous naturalism and occasional imported European motifs, with Rajput painters, featuring brilliant colour and encompassing spaces for Hindu as well as courtly subjects.

In their indefatigable cataloguing of artists' names, the authors have done what Vasari did for Italian painting: they have established a canon of names and oeuvres, complemented in each case by lists of works and up-to-date bibliographies.  What their introduction does not challenge is the very act of signing one's name in the first place, particularly by artists in and around the Mughal court.  Moreover, the vital role of patronage, particularly important in a book with so many court sponsors, receives little analytical attention.  And some other schools of Indian painting, notably the Kota/Bundi artists, make only a cameo appearance here owing to their artists' silence about their identity. This is a topic for analysis in its own right, in contrast to the Mughals.

Future research by younger scholars (such as Yael Rice, who assisted with this review) will amplify or more broadly contextualize these foundations of artistic identity.  But, forevermore, Masters of Indian Painting will comprise the Vasarian touchstone of its rich subject.

Masters of Indian Painting 1100–1650  by Milo Beach, B. N. Goswamy, Eberhard Fischer accompanies the exhibition ‘The Way of the Master. The Great Artists of India 1100–1900’, which was shown at the Museum Rietberg, Zurich, before travelling to the Metropolitan Museum of Art, New York. Under the title  ‘“Wonder of the Age”: Master Painters of India, 1100-1900’ it remains there until 8 January 2012.